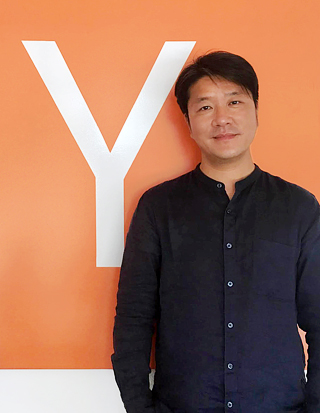 Michael Chong, founder and CEO of Seerslab, poses at Y Combinator in California. His company was one of over 90 start-ups picked for the 2016 Summer Batch. [MICHAEL CHONG]

In 2011, two Korean smartphone camera apps became international sensations. Pudding Camera offered a variety of filters for digital photos, a novel idea at the time. Pudding Face Match was even more fun. It allowed users to take a selfie and discover which celebrities they resembled. In December 2011, just 18 months after the apps were released, some 20 million people had downloaded them.

At the end of 2014, the Pudding line was totally reshaped by one of its developers. The new product was an app that photoshops videos in real time with facial-tracking and facial-recognition technologies. Initially called Pixbee in a beta version, the app was renamed Lollicam and rolled out in May 2015 by Seerslab, a Korean start-up.

According to Seerslab founder and CEO Michael Chong, Lollicam was downloaded 1 million times in the first four months. Currently, it has been downloaded 6 million times.

Chong participated in the Summer Batch 2016 program at the Silicon Valley accelerator Y Combinator. After the two-month program wrapped up last week with Demo Day, its culmination, he received calls from over 60 potential investors from around the world, according to the former Samsung Electronics employee in a recent FaceTime interview.

“We never expected we would get offers from so many companies,” said the California-based entrepreneur. “Over 60 investment calls definitely means a lot to us, given other start-ups that took part in the Y Combinator Summer Batch usually get half that number.”

Based in Mountain View, California, Y Combinator is touted as one of the most prestigious incubators for early-stage tech start-ups in the world. Companies that participate in the Summer Batch program receive seed money, advice and connections in exchange for 7 percent equity. Alumni include such successful companies as Dropbox, Airbnb and Reddit.

Seerslab was one of over 90 start-ups worldwide that joined the summer session, and is only the fourth Korean start-up to have been selected by Y Combinator so far.

“There is a saying that you should not brag about your school, money or family background at Y Combinator because it’s where all the outliers from around the world gather,” Chong said. “For the kind of tech start-up with a core technology like us, Y Combinator could offer priceless mainstream connections.”

Chong said he is well aware that countless start-ups go to Silicon Valley with high hopes of success, only to return home after bitter failure.

On top of a rapidly growing number of Lollicam users, Seerslab has achieved a lot in16 months. It has raised around 2.9 billion won ($2.6 million) from the government as well as groups of investors. And the app was one of six third-party apps that Facebook introduced at an F8 Developer Conference in April. Facebook said users could use it to “create fun and personality-infused profile videos with just a few taps.”

The Facebook Profile Expression Kit was launched on April 13 with support for five other apps: Boomerang by Instagram, BeautyPlus, Cinemagraph Pro by Flixel, Lollicam, MSQRD and Vine.

Lollicam specializes in letting users add fun to their stills and videos with a collection of more than 100 animated stickers, emoticons and filters. Users - either individuals or a group - may swap their faces and change themselves into animals or animated characters with the help of the app’s facial motion recognition technology.

The functions are not absolutely new. Snow, a video selfie app from Korea’s top portal site Naver, as well as Snapchat, an image and video messaging app, boast similar features and are very popular, especially among multimedia-friendly millennials.

Those companies are merely following in his footsteps, claims Chong.

“With Pixbee [the predecessor of Lollicam] we coined and initiated such industry-standard terms as facial tracking, facial recognition, pre-processing of video, cinematic effects and animated stickers,” he said. “They did not exist at the time.”

After majoring in environmental engineering at university and studying technology management in graduate school, Chong started as a systems engineer at an American telecom operator before moving on to Samsung Electronics, SK Telecom and SK Platform. At SK Platform, he was responsible for developing mobile video content and platforms. He joined forces with current CTO Kim Jae-chul, one of Pudding Camera’s developers, who is one of the most talented video image recognition technicians. 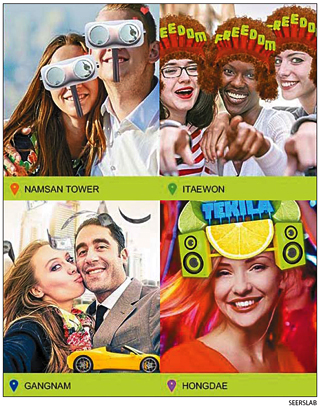 Lollicam’s Geo Stickers, which work only in certain neighborhoods, symbolize characteristics of locations in Seoul including Itaewon and Gangnam. [SEERSLAB]

As the market for video selfie apps continues to grow, Seerslab now has a mission to expand its share of the market. The key is differentiating its services.

“I intend to prioritize raising the number of global users rather than making money for the time being,” he said.

The company has been experimenting with novel features for a video selfie app too. Lollicam introduced a new feature called “Geo-Sticker” in April. The stickers are downloadable only in certain locations and are only visible for a specific duration of time.

Chong said his company applied for a patent for the Geo Sticker in 2014, months earlier than Snapchat introduced the “Geofilters,” which let users put artwork, names, logos and other designs over messages in the app - only in certain locations.

Lollicam also began offering a so-called music sticker in collaboration with girl band Exid in July. Users can include music they like in a video they shoot. It’s a win-win for both Lollicam and the musicians, Chong explains, given that a host of new songs are released every day but too few channels are available to promote them. The sticker may become a viral marketing tool.

“Such globally-recognized start-ups as Wave, Skype and Spotify did not originally come from Silicon Valley. They all began from their home turf and relocated to Silicon Valley to take advantage of various benefits such as mentoring, investments and exit,” he said.

The United States also has the largest variety of brands and content for future partnerships. But the country is not the No. 1 target market for Seerslab, according to Chong. Its key markets are Korea, Japan, China and Southeast Asia.

He did not conceal his desire to be acquired by a bigger company - a typical exit strategy in Silicon Valley but rare in Korea.

“It takes immense resources to grow on the back of natural methods [such as marketing],” he said. “The best scenario would be a platform with a large number of users recognizes Seerslab’s value and buys it - although I know that won’t be that easy.”