Preserving the history of traditional music : Seoul continues cultural investment with the opening of a theater exclusively for gugak performance

Preserving the history of traditional music : Seoul continues cultural investment with the opening of a theater exclusively for gugak performance

Left: The Seoul Donhwamun Traditional Theater opened on Sept. 1 across from the Donhwa Gate of Changdeok Palace. Top: The royal road that stretches southward from the gate used to be where the kings and queens of Joseon Dyansty (1392-1910) embarked on important processions. Bottom: A photo of the road taken in the 1930s. The road has managed to maintain its original width and form over the years. The Seoul Metropolitan Government has been refurbishing the road and nearby area to preserve the rich history there. Part of the plan was building the Seoul Donhwamun Traditional Theater, dedicated solely to gugak, traditional Korean music.

The Seoul city government has been constructing the theater since 2013 in hopes of revitalizing gugak and restoring the historic area.

The theater - situated right across from the Donhwa Gate (also known as Donhwamun Gate), the main and southern gate of Changdeok Palace - is built in hanok (traditional Korean house) style.

The first floor features a yard where outdoor performances can be held. The performing stage downstairs holds a total of 140 seats. 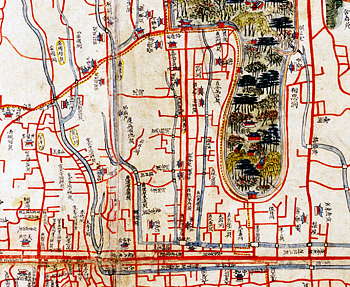 This 18th-century map of Seoul shows the tree-filled Changdeok Palace grounds and the royal road that stretches southward from Donhwa gate. [LEEUM, SAMSUNG MUSEUM OF ART]

“We have decided not to use any electric sound amplifiers,” Kim Jeong-seung, the art director of the theater, told reporters at a press event held on Aug. 27. “This theater is acoustically designed to deliver sound to the audience without relying on loud speakers.”

The use of wood both on the floor and the ceiling, according to officials from the Sejong Center for the Performing Arts, can help improve and amplify the sound, as natural cuts on the surface of the wood can have such an effect.

“We believe the audience will be able to enjoy the natural sound of the traditional music and instruments,” Kim added.

History of the area

In fact, the construction of the theater is part of Korea’s larger scheme to restore the rich history of the area.

Although Gyeongbok Palace was the official palace of the Joseon period (1392-1910), the kings of Joseon stayed at Changdeok Palace for longer periods of time. Changdeok, considered the most beautiful royal residence of Joseon, is also a Unesco Cultural Heritage site.

And the road that stretches south from the Donhwa Gate may look like any other road in the bustling Seoul metropolis, but it’s not.

It is the only remaining royal road in Seoul that retains its original width and structure. During Joseon, the king and his officials used the gate and the road for their royal processions to Jongmyo, the ancestral shrine of the royal family.

It is also one of two roads used by Joseon royalty that runs from north to south. The other is Sejong-daero, which is situated in front of Gyeongbok Palace’s Gwanghwamun, which of course looks nothing like it used to during Joseon.

Since 2008, there have been calls for preserving history and tradition in the area. The Seoul government in 2012 was able to remove the gas station right across Donhwa gate. And in 2014, it announced plans to refurbish the 1-kilometer (0.6-mile) road by the end of 2016.

The plans included building the Seoul Donhwamun Traditional Theater as well as a museum dedicated to minyo (folk music). The museum is slated to open in 2018 where the gas station used to stand.

Some may wonder why music-related institutes are being constructed in the area.

The area around Changdeok Palace has a strong connection with gugak, as it was home to Yiwangjik Aakbu, a royal organization for music which is now today’s National Gugak Center. The Joseon Research Center for Vocal Music, opened in 1933, was also located nearby.

It was also where some of Korea’s most extravagant, high-end items to be used in the palace were transported. After Japanese colonization began and the royal family dismantled, it was where the products of the royal culture - tteok (Korean rice cake), hanbok (traditional Korean clothing), jewelry and crafts - were manufactured and sold.

The Seoul Metropolitan Government has been active in drumming up public attention for the area. In April, it held a photo exhibition of the road in front of Donhwa Gate. It is also received ideas from the public on ways to utilize the road.

The road has also been included in the five areas that the city has designated for hanok preservation.

Other areas include Bukchon, Seochon and Insa-dong. Those building and maintaining hanok in these areas will receive financial support from the city government. This comes as many hanok owners are tempted to demolish their old structures and build lucrative skyscrapers.

The title of the festival, “a special case or an example” in Korean, represents how the theater hopes to present traditional music as special music to contemporary Koreans.

From traditional music such as folk music and yeonhui plays (performances of traditional Korean performing arts) to chamber music and orchestral music, the festival will showcase the broad range of gugak.

Then, from Oct. 7 to 29, “Taste of Sound, Sound of Taste!” will be held. The mixture of Korean traditional food and gugak will offer a special experience to participants. There will also be lectures during the performances, helping participants to understand the food, music and the stories behind them.

From Nov. 2 to 9, there will be performances by the Contemporary Music Ensemble Korea and Sagye, the gayageum (traditional zither) ensemble, among others.

“With the theater, I hope gugak will become more accessible to people both young and old,” said Kim from the Sejong Center.

In hopes of putting gugak on the map worldwide, the theater will publish pamphlets and other promotional materials in English starting next year.

For more information about planned performances, visit the website of the theater, www.sdtt.or.kr, or call 02-3210-7001