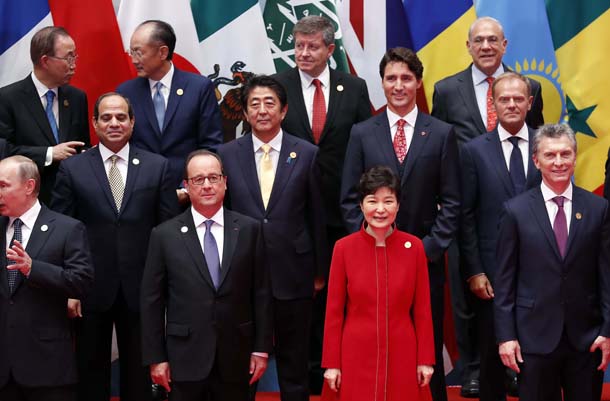 President Park Geun-hye, center right, poses for a commemorative photo with other world leaders as a G-20 summit kicks off on Sunday in Hangzhou, China. [JOINT PRESS CORPS]

North Korea’s nuclear and missile threats and the subsequent decision of the South and the United States to deploy a controversial anti-missile system were key topics in a series of presidential summits among the world leaders this weekend.

The Blue House said Sunday that President Park Geun-hye will meet with Chinese President Xi Jinping Monday morning in Hangzhou, China. After visiting Russia and meeting with President Vladimir Putin, Park arrived in the eastern Chinese city on Saturday to attend the Group of 20 summit. The multilateral meeting formally began on Sunday.

In their summit on Saturday in Vladivostok, after a regional economic conference, Park and Putin agreed they will not tolerate North Korea’s possession of nuclear arms. They also agreed to improve communication to resolve the issue.

In a joint press conference after their summit, Park also defended her decision to allow the U.S. deployment of the Terminal High Altitude Area Defense (Thaad) system in the South. Park said the North’s continued threats to carry out additional nuclear tests and a preemptive nuclear strike, while advancing its nuclear capabilities, are a “matter of life or death” for South Koreans. 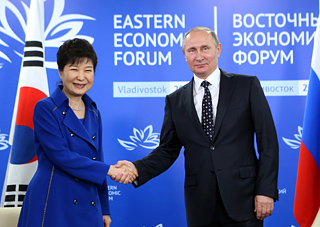 President Park Geun-hye and Russian President Vladimir Putin shake hands at a bilateral summit on Saturday on the sidelines of the two-day Eastern Economic Forum in Vladivostok. [KIM SEONG-RYONG]

“Under these circumstances,” she said, “a responsible government is forced to look for all necessary measures to protect the nation and lives of its people.”

While Seoul and Washington repeatedly stressed that the Thaad deployment is to deter Pyongyang’s nuclear and missile provocations, Beijing and Moscow have showed concerns that the system will be used to spy on them.

In the press conference, Putin also addressed the North’s continuing nuclear arms development and said Russia and South Korea will not acknowledge Pyongyang as a nuclear state.

While the two leaders did not make a direct comment on Thaad during the press conference or the economic conference, an official of the Blue House said they had a constructive discussion about the strategic stability of the Korean Peninsula and Northeast Asia, including Thaad. He said the summit proceeded with an amicable atmosphere.

Although they discussed the Thaad issue, they avoided mentioning it at the joint press conference in order to prioritize economic cooperation, a foreign affairs official said. According to the Blue House, 24 memoranda of understanding between the two countries on trade and investment were signed during Park’s trip, and Korean companies are being offered opportunities to participate in economic projects in the Far Eastern region that will be worth about $395 million.

Before meeting the Russian leader, Park stressed that the South will not need the controversial system if nuclear threats from the North are eliminated. “We would have no need for the Thaad system should there be an elimination of nuclear threats from North Korea,” Park said in a written interview with the Russian state-run news agency Rossiya Segodnya. The interview was published on Friday.

Park is expected to use the same narrative to explain her decision on Thaad to Xi during their meeting this morning. But it remains to be seen how Xi will respond to her message. During his meeting with U.S. President Barack Obama, Xi did not hide China’s displeasure toward the deployment of the American anti-missile system to the South.

According to Xinhua News Agency, Xi said that China opposes the deployment, asking the United States to respect China’s strategic security interests. The protest by the Chinese leader was made at the bilateral summit on Saturday on the eve of the G-20 summit.

“Xi said China has been sticking to denuclearization on the Korean Peninsula, safeguarding peace and the stability of the peninsula, and solving relevant issues through dialogue and consultation,” the Chinese state media reported. “He urged all parties to refrain from any act that could escalate regional tension and to collectively make positive efforts to put the situation back on the right track.”

While Obama’s response to Xi was not immediately made public, the White House said he “underscored the United States’ unwavering commitment to the security of its treaty allies, and noted that the strength of those alliance relationships has contributed to the security and stability of the Asia Pacific region.”

This morning’s summit between Park and Xi will be their first meeting since Seoul announced in July its decision to accept the Thaad deployment. In their previous meetings, Xi gave Park a passionate welcome, often calling her an “old friend.”

“Because China is the host of the G-20 summit, Xi won’t intentionally express displeasure, but he will still clearly state China’s opposition,” said Professor Lee Hee-ok, dean of the Graduate School of China at Sungkyunkwan University in Seoul.

“If the two leaders reaffirm the difference in their positions without offensive language,” said a Foreign Ministry official, “and if they can issue an announcement that they will closely communicate on the matter, we will see it as a good outcome.”

Before their rocky summit on Saturday, Obama faced what some see as a calculated diplomatic snub by China. As he arrived in Hangzhou, Obama was forced to disembark Air Force One through the rear exit door, as no rolling staircase was provided by Chinese authorities. Park, meanwhile, had a red carpet ready and waiting when she arrived.