Koreans get used to saying, ‘Table for one!’

Koreans get used to saying, ‘Table for one!’ 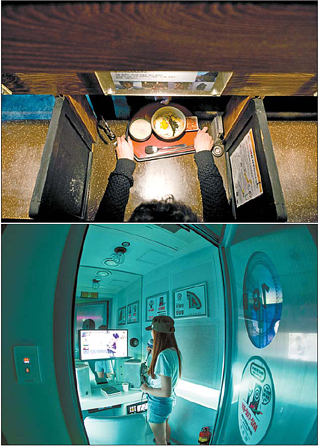 Top: A man receives a meal at a restaurant in Changcheon-dong, Seodaemun District, western Seoul, which is specialized in serving meals for one person. Bottom: A woman sings alone in a noraebang (singing room) in the Hongdae area of western Seoul, which caters to customers who are on their own. [KWON HYUJ-JAE, KIM SEONG-RYONG]

When Jeong Yoo-jin flew to Osaka in July for a vacation, the office worker didn’t bother to arrange international roaming for her phone.

For an entire week, the 34-year-old traveled off the grid, completely separated from her job in Korea, unable to be reached by colleagues. The risk was high, she says, but worth it in the end - to be truly alone.

“When I first arrived in Japan, I was jittery for a whole day,” confides Jeong. “I wondered whether anyone was trying to contact me. From the second day, I got used to it and gradually felt at ease being left alone.”

According to data from Hana Tour, a local tour agency, Jeong represents a trend that’s rapidly growing among Korean travelers.

“People who are hesitant about traveling alone give it a shot one day,” says Jeong Ki-yoon, head PR officer of Hana Tour, “and learn that it’s actually quite nice.”

Last year, 10.7 percent of all moviegoers at CGV theaters went alone, up from 8.1 percent in 2013. From January to June, 13.3 percent of moviegoers went by themselves. At Megabox theaters, 15.2 percent of purchases were single tickets.

Data from Statistics Korea indicates that over half (56.8 percent) of all Koreans in 2014 spent their leisure time alone, up from 44.1 percent in 2007. 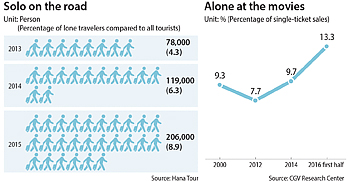 “I have loners who come to read, stare at the wall or ask my opinion on whatever personal issue they have,” says Jeong In-seong, owner of Chaeg Bar in Seodaemun District, western Seoul, a bar that also has books for people to read. Three out of every five people who visit his bar comes alone.

“Whatever age they are, everyone just looks really depressed,” says Jeong.

In a country where connections based on school ties, kinship and hometowns have played a key role in how society is structured, the solo phenomenon hints that Korea is becoming more individualistic, says Jeon Sang-in, a sociology professor at Seoul National University.

Choi Jong-ryeol, a sociology professor at Keimyung University in Daegu, claims the transition is developing rapidly and that more people are trying to detach themselves from others.

Every morning as she leaves her house and gets inside her car, the lawyer spends 10 minutes just staring ahead.

“I just hold on to the steering wheel and sit there,” she explains. “Without that short moment to myself, I probably would feel suffocated throughout the entire day.”

After work, Kim is learning scuba diving, which gives her a world that is “entirely isolated.” It’s there that she’s able to go wherever her thoughts bring her.

Pundits think the antigraft act, set to be implemented on Sept. 28, will add momentum to the trend.

The Improper Solicitation and Graft Act, dubbed the Kim Young-ran Law, will prohibit public officials, teachers and journalists from being treated to meals costing more than 30,000 won ($27) or accepting gifts price above 50,000 won. Roughly 40,000 organizations will come under its purview.

“The common sense notion that you have to be loyal [to your clients] and feed them well will become ‘uncommon sense,’” said Kim Moon-jo, a sociology professor at Korea University. “People will now eat and drink simply during lunch hours, as oppose to the past when had heavy meals together.”

Many will eat and drink alone.

Lee Na-mi, who heads CounselingNet, a psychological analysis center, said the new law will be especially powerful around holidays, when everyone used to fret over the expensive gift sets they were compelled to give others.

An official from Samsung Group said the conglomerate was discussing internally whether to sharply lower the budget for holiday gifts distributed to their business partners and clients, or ditch the gift-sharing culture entirely.

With golfing no longer allowed to be written off as a corporate expense, an official at Hanjin Group expects more businessmen to stay home over the weekends and spend quality time with their families.

A spokesman for LG Group agreed, but says he worries about not being able to exchange ideas with fellow businessmen in the same industry.