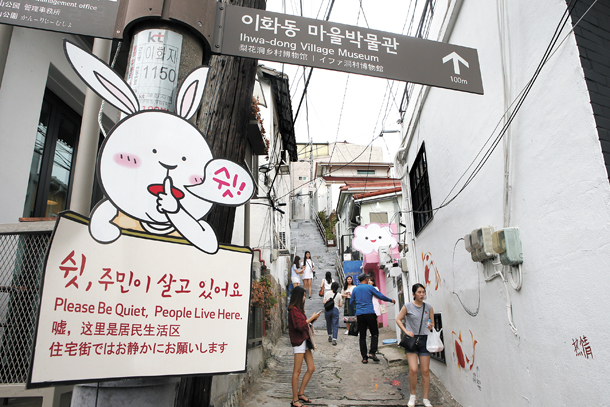 A sign requests “silent tourism” at the entrance of Ihwa Mural Village in Jongno District, central Seoul. The village became a tourist attraction because of 70 or so murals painted on its walls. But some residents, annoyed by the noise and littering of tourists, erased six of them. [KIM CHOON-SIK]

In the alleys of Bukchon Hanok Village, an area in central Seoul famed for its traditional Korean houses, countless tourists tromp around taking photos with digital cameras and smartphones. The tourists are loud. You can hear them coming.

“Every morning at around 7:30 a.m., we hear a ton of tourists making noise,” says Kim Jae-hyeok, 43, a Bukchon resident. “I think I’m going to get a neurosis from it. I cannot tolerate the noise anymore.”

“When I first moved here, I was very open to tourists and let them come into my house and use my bathroom,” says Oh Ok-sun, 55, who has been a resident for four years.

But the steady stream has become more like an inundation. “People just lined up to come into my home so I had to shut my door,” she says. “And now, I have to clean up garbage that the tourists leave every morning.”

Tourism is good for the economy of course, but not for people whose homes are destinations for busloads of visitors from China and Japan. Bukchon shares this problem with Ihwa Mural Village in Jongno District, central Seoul, which has 70 colorful murals, and Seochon in Hyoja-dong and Sajik-dong, west of Gyeongbok Palace, which boasts traditional Hanok houses in which merchants resided during the Joseon Dynasty (1392-1910).

In Bukchon, the Jogno District Office has posted 16 signs that read “Silence please” in English, Chinese and Japanese.

The Seoul city government and Jongno District Office are now concerned that the deluge of tourists may lead to a so-called touristification of certain neighborhoods. Touristification is when an ordinary area becomes so popular with tourists that it forces residents to move away.

“18 complaints are quite a lot if they’re all about the tourists,” says an official at the district office.

The number of residents packing up and leaving the area is increasing. “Of 90 houses here, there are 10 that are unoccupied,” says Lee Gang-bae, 53, a representative of Gahoe-dong in Jongno District. “Existing residents are starting to consider leaving because of various noise and parking difficulties.”

After some neighborhoods became tourist attractions, groceries, laundries and butcher shops disappeared as residents left the neighborhood. “In Paris, 400 areas were selected as protected zones where various shops such as groceries and laundries are supported and protected by the government,” said Lim Young-shin, president of a nonprofit organization, Imagine Peace.

Some residents are taking matters into their own hands.

In April, residents of Ihwa Mural Village started to erase some of the murals, their most popular tourist attraction. Earlier this month, they painted over some more. The stairs adorned with paintings of sunflowers, a prized feature, were painted over with bland grey paint.

On the walls next to the stairs, there are various phrases written in red paint such as “Do not tour around residential areas” and even “Stop tourism.”