China down, with Syria to go

China down, with Syria to go 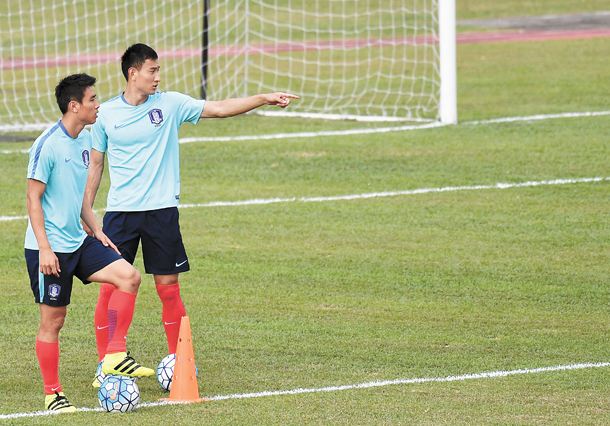 Korea has started its race to the 2018 World Cup with a win over China. After taking three valuable points from the win, Syria comes next as Korea hopes to keep up its momentum before the match against archrival Iran on Oct. 11. However, while Korea and Iran were the favorites to qualify for the World Cup from Group A before the qualifiers began, it now seems the tickets to Russia could be up for grabs by anyone in the group.

Korea, ranked 48th according to the FIFA rankings, is grouped with Iran (39), Uzbekistan (55), China (78) Qatar (80) and Syria (105) for the ongoing Asian qualifiers for the 2018 World Cup. Only the winner and runner-up of the group will gain automatic tickets to Moscow in 2018. The third-place team will play a playoff round against the third-place team of Group B, after which the winner will have to compete for a spot with the team that placed fourth in the Confederation of North, Central American and Caribbean Association Football (Concacaf) qualifiers. Obviously, Korea wants to avoid the latter and gain a quick berth at the World Cup.

Iran, the highest ranked team in the group, and Korea, a regular at the quadrennial football tourney, appeared likely to dominate Group A, while Uzbekistan seemed to be about the only dark horse that could pose threat to the two teams.

However, the second half onslaught on Thursday proved otherwise. Up uptil the 60th mintue, anyone watching the game would have expected a landslide victory by Korea. But when Korea started to crumble, the atmosphere at the Seoul World Cup Stadium saw a drastic shift. Korean fans grew agitated and worried, and Chinese fans started to see hope. Were it not for several miraculous saves, it might have been difficult for Korea to take a win.

The first round match between Iran and Qatar ended on a similar note. Iran hosted Qatar at the notorious Azadi Stadium in Tehran. The stadium is known as a place where visitors go to suffer because of its location at an altitude of 1,274 meters (4,180 feet) above sea level, as well as the intimidation by the Iranian fans who fill up the large stadium. Iran came out of the match with a 2-0 win but other than the score itself, the match was not one-sided, at all.

Qatar, the host of the 2022 World Cup, has been making huge investments into its football program. The oil money of Qatar is not just spent on state-of-the-art stadiums, but also to support young talent by the Qatari football association, and it was evident that this investment is paying off. Iran struggled against the Qatari defense and could not get on the scoreboard during the regulation 90 minutes. It was not until injury time after the second half that Iran scored back-to-back goals in the span of a minute that brought the host its much anticipated victory.

Similarly, Uzbekistan, third among the teams in Group A in rankings, took a narrow 1-0 win over Syria at home. The Syrian defense was enough to suffocate Uzbekistan’s offense, which was unable to make any notable plays until it scored in the 74th minute.

While the current standings of Group A are in the order of Iran, Korea, Uzbekistan, China, Syria and Qatar, this essentially bears no meaning. Granted, they lost, but teams that were deemed “inferior” left the “powerhouses” utterly dumbfounded. More notably, they pulled it off in away games far from their home grounds.

The match between Korea and Syria kicks off tonight at 9 p.m., Korea time. JTBC will air the match live.