Kim Ra-kyung lights up the field with blinding fastballs

Kim Ra-kyung lights up the field with blinding fastballs 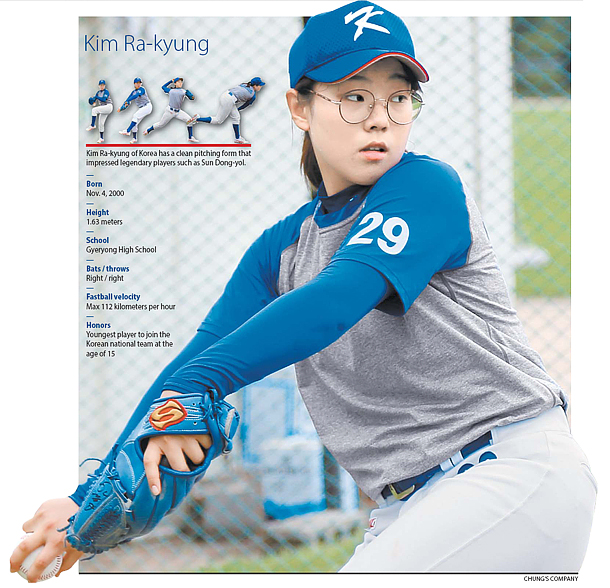 Kim Ra-kyung of Korea has a clean pitching form that impressed legendary players such as Sun Dong-yol. [CHUNG’S COMPANY]

The Women’s Baseball World Cup (WBWC) kicked off last Friday at Hyundai-Gijang Dream Ballpark in Busan, with 12 teams from around the world participating in the tournament. Granted, the tourney itself may be less known compared to the World Baseball Classic, the men’s version of a baseball world cup, but the women’s event is every bit as exciting. Korea’s pitcher Kim Ra-kyung is one of the few spectacles of the tournament, leaving the audience in awe with pitches that travel as fast as 110 kilometers (68 miles) per hour.

On Sunday in Gijang County, Busan, Korea (ranked No. 11 worldwide) hosted Cuba (No. 8) in a group stage match of the WBWC.

Standing on the mound starting from the top of the third inning was a young girl wearing glasses. The majority of the audience looked puzzled as they had no idea that this girl had a shoulder as sturdy as an adult male’s, but as soon as she wound up and fired the ball, the crowd became speechless. Her fastball travelled from the mound to the plate in the blink of an eye and the velocity was measured at 105 kilometers per hour. Little did they know that this girl was Kim, a 15-year-old baseball prodigy praised by Sun Dong-yol himself, the legendary Korean pitcher.

Against Cuba, Kim pitched for 2 and 1/3 innings and yielded only one run. She had just tossed one and 1/3 innings the previous day against Pakistan, but there was no sign of fatigue on Kim’s face. After Sunday’s game, Kim earned a run average of 2.45. Although trailing up until the fifth inning, Korea tallied three runs in the sixth alone to make a dramatic comeback and secure its spot in the next round.

In the United States, the home of modern baseball, female baseball players such as Sarah Hudek, the daughter of the former MLB pitcher John Hudek, are well known. Women’s baseball has also garnered wide attention in Japan, and the country has an U-15 and semi-professional league. Since the WBWC was founded in 2004, the United States and Japan are the only winners of the otherwise short-lived tournaments. While the United States won the first two events, Japan has claimed titles from every biennial tournament since 2008. The two nations are considered the trailblazers of women’s baseball in the world today.

Still, Korea is in the next round of this year’s WBWC already, indicating the potential it holds in the sport.

Kim is the youngest member of Team Korea, but her performance on the mound does not represent this. Her fastballs often reach 110 kilometers per hour, a speed that almost matches the fastball velocity of top female pitchers such as Hudek. Pundits say her clean form is the engine that allows Kim to toss such high quality pitches.

Kim started baseball because of her brother, Kim Byung-keun, a pitcher for the Hanwha Eagles in the Futures League, the second level baseball league in Korea. “I remember spending a lot of time in a baseball stadium when I was young,” recollected Kim. “When others of my age played with toys, I played with baseballs. Naturally, I started throwing them.”

She played in the little league alongside boys. While some belittled her for playing the sport that had no established league for women, Kim never gave it up.

Now in high school, she enjoys the nickname ‘baseball prodigy.’

“I am not sure if I have the skill to be called a prodigy but if that helps women’s baseball to gain popularity, who am I to say no to the nickname?” Kim asked with a wide grin on her face. “I am sure if fans started to watch women’s games, they would find they have a charm of their own.”

About the recent game, she said, “It was my first time to pitch in front of such a large crowd so I was nervous, but I am thankful that so many fans attended the game. I realized there are many women in Korea who also would like to try playing baseball. I hope I can contribute to the development of the sport by coming out of the World Cup with good results.”