Oh Ji-ho learns how to be a villian: The actor, known for his romantic comedies, tries taking on an action flick

Oh Ji-ho learns how to be a villian: The actor, known for his romantic comedies, tries taking on an action flick 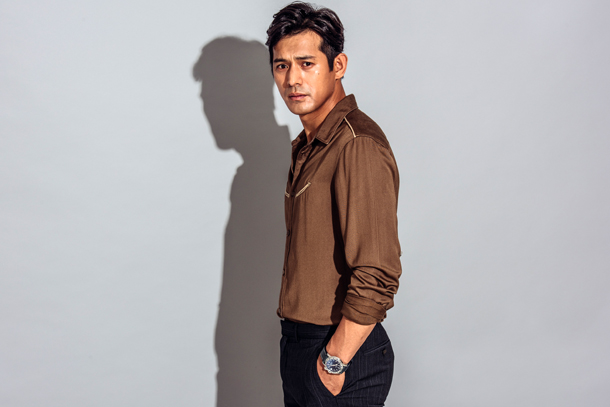 Actor Oh Ji-ho has established himself in romantic comedies such as the movie “Love Clinic” (2015) and the KBS2 series “The Queen of Office.” However, the 40-year-old says that it has now become time for him to pass on these roles to younger actors. And this time, Oh has decided to return to the silver screen as a psychopath.

In the upcoming “Showdown” (working title), which is scheduled to hit local theaters on Sept. 22, Oh plays Han Jae-hui, a rich villain that is crazy about fighting. The psychopath does not care about justice nor rules, but only the excitement he feels when fighting.

Directed by Shin Dong-yeop, the new action flick shows the confrontation of Han and a twenty-something, played by actor Lee Ju-seung, who seeks to take revenge on Han after his policeman brother is killed. Through these characters’ fights, the movie brings up the social issue of hyeonpi, or what is translated as a physical fight that online game players have after quarreling with one another while playing games online.

To talk about his character and the upcoming film, Oh sat for an interview with M Magazine, an affiliate of the Korea JoongAng Daily. Here are the edited excerpts from the interview.

Q. The story of “Showdown” sounds like something from a game or cartoon. Although this may not be your first action project, it is the first time for you to play a cruel and emotionless psychopath. How long did it take for you to decide to star in the film?

A.I was a little hesitant when I first read the script. Not because I had to play a villain, but because I wasn’t sure whether I would fit in a cartoon-like movie. Yet, I liked how the movie deals with a socially weaker character taking revenge against a socially stronger one. I decided to take the part after talking to the director. However, I asked him not to blow life into the villain.

What do you mean by “blow life into the villain?”

When a villain appears in a movie, it usually explains how the character became so evil. Having an action movie that maximizes the feeling of triumph was of the utmost importance, so I thought featuring the villain’s background would disturb the audience from fully immersing themselves into the movie. I hoped to portray my character as someone who only cares about fighting.

What did you do to make the action look more realistic?

To make the live action scenes more realistic, I didn’t use any wires. Although sometimes I had a stunt double, I tried to partake in every scene. The movie features fighting that is a mixture of Arnis, a traditional martial art from the Philippines, and modern martial arts that looked quite appealing and glamorous on film. I learned from [Chinese actor] Donnie Yen’s films. Since I like martial arts, shooting for the movie wasn’t that difficult.

In that sense, shooting the scenes must have been very exciting. How did you feel while taking part?

I had a great time shooting for the film (laughs). If there is anything else that I cared about other than action, it’s the physical appearance. As soon as my character appears, the audience has to realize right away that he is a rich villain. So I wore a suit, applied pomade to my hair and put on high-end accessories. Despite these efforts, I found the color of my pupils a problem. Since they are brown, I couldn’t throw away a kind image, so I wore black contact lenses, which then made me feel like a true villain.

To turn to your life, you’ve already reached your 40s.

I feared becoming older after getting married. So I try not to miss what I liked doing in my 20s and 30s such as exercising, watching movies and meeting friends. Although I may not be able to do these as much as before, I wish to continuously enjoy doing what I like from time to time. But these days, my abs suddenly disappear if I don’t work out for even a few days (laughs).

You became a more familiar face after you appeared in KBS2’s reality show “The Return of Superman” with your daughter. Wasn’t it difficult to expose her through TV?

I mulled over the issue for a long time, but made up my mind to join the show because I wanted my daughter to see herself with me before I get older. There are more than 20 CCTV cameras placed in my house for the program, but nobody seems to help me take care of her. I’m so tired (laughs).