Parents seek ways to best raise their children: After increase in child abuse cases, a focus on prevention

Parents seek ways to best raise their children: After increase in child abuse cases, a focus on prevention 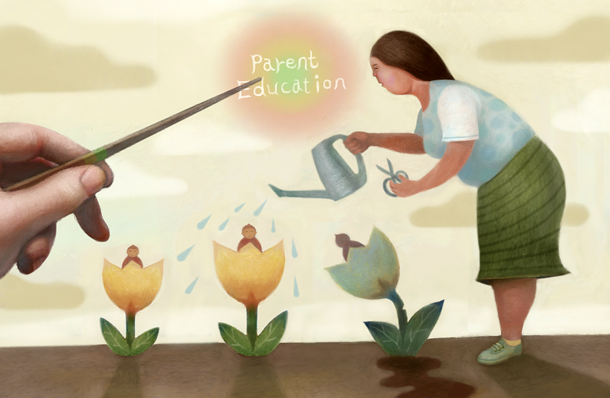 Two young parents and their kids walked into a restaurant in Seongnam, Gyeonggi late last month.

The family of four found a table in the crowded restaurant and the mother began feeding her children sitting in high chairs. They seemed like any ordinary family dining out on a Saturday afternoon.

After finishing the meal, the father paid the bill and left the restaurant. He was soon followed out by the mother, who left the five-year-old and three-year-old siblings behind.

Based on video recorded by a surveillance camera installed near the restaurant, the police identified the parents. But, when they contacted the mother, she reportedly told police, “They are not my kids. You’ve got the wrong number.” 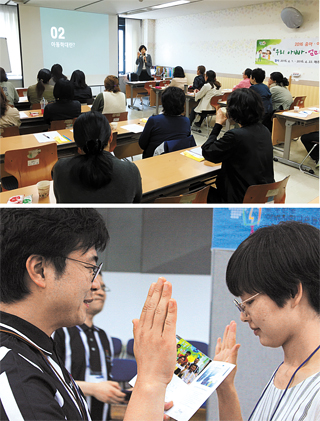 Top: Parents learning how to discipline their children depending on their ages at Healthy Family Support Center located in Bucheon, Gyeonggi this April. Thirty-one family support centers located within Gyeonggi provide classes on parenting. Bottom: Durrano Father School is one of the country’s longest-running parenting programs. It was launched 20 years ago and teaches fathers how to leave a good legacy for their children. [HEALTHY FAMILY SUPPORT CENTER, DURRANO FATHER SCHOOL]

When the father realized they may face criminal punishment for abandoning their kids while talking to authorities, he eventually showed up to the police station to pick up his children.

The number of child abuse cases in Korea is growing and the case of the siblings left at the restaurant is actually one of the less horrifying incidents in the recent past.

A 25-year-old aunt killed her 3-year-old niece in Naju, South Jeolla, in early August. The aunt was taking care of her niece while her older sister was living in another city for work. She reportedly strangled her niece and forcefully put her face underwater.

In March, a 23-year-old father was sentenced to eight years in prison after he dropped his three-month-old daughter, who fell 1 meter (3.2 feet) to the ground in Incheon.

After that, the father and mother didn’t take care of the baby for 10 hours. The baby eventually died. The parents reportedly searched the internet to find ways to discard the corpse of the baby.

An 11-year-old girl sent shockwaves across the nation in December last year. The girl, who lived with her father in Incheon, managed to escape her home to get some food.

When she was first discovered by a supermarket owner she weighed 16 kilograms (35 pounds), the average weight of a four-year-old girl. She was starved for days and locked inside a room for more than two years.

The story of the 11-year-old girl prompted Kang Eun-hee, the minister of gender equality and family, to launch “parenting education programs” and make them mandatory for all parents.

If the program becomes a must, it will be a requirement for all parents, not only a selective group of parents who have troubled kids.

Kang recently stressed the importance of parenting education. “Eighty percent of child abuse is committed by parents. The biggest reason is that the parents simply don’t know how to raise their children,” Kang said during a forum hosted by the Korea Institute for Gender Equality Promotion and Education held in June. She also emphasized that the program was open to people of all ages, from elementary school students to grandparents.

In order to do that, the program needs to be reviewed by the Ministry of Strategy and Finance first.

With extreme child abuse cases frequently making the headlines in recent months, some local governments have taken the initiative and now offer classes on the basics of child-rearing for new parents.

Gyeonggi was the very first local government to establish such an ordinance in January of last year. The provincial government shelled out 6.4 billion won ($5.7 million) for a series of parenting programs, open to any parents.

Private and charitable organizations also say their child-rearing classes are garnering more attention than ever before.

Of all places, the Seoul Arts Center, a venue for classical concerts and performances of big-name stars, is one of the most unlikely places to offer such parenting programs.

The SAC offers a 12-week program called the Good Parents Academy, which invites experts in various fields from arts education to present each week. The tuition is 220,000 won.

The program was first launched in 2013.

“We have some art classes for children and about 600 children are enrolled. And their parents, who drive their kids to the center, said that they too wanted to learn something while they are waiting for their kids. That was the beginning of this academy,” said Lee Jeong-ah, an employee of the Good Parents Academy.

She continued, “Back in the old days, almost all families were extended families. Parents could pick up tips on child-rearing from their parents or their grandparents [who were living together with them], but most families these days are made up of the mother, father and children. There is a demand for a source of this kind of information.

“A majority of students [for the Good Parents Academy] are people in their 30s and 40s but I sometimes see grandmothers taking the programs because they take care of their grandchildren instead of their daughters or daughters-in-law,” Lee added.

Durrano Father School was launched 20 years ago while Child Fund Korea, which is also known as the Green Umbrella Foundation working for the welfare and rights of children, began offering parenting classes back in 2012.

Duranno, which is one of the longest-running parenting programs across the nation, is held at a variety of places throughout the country, from military bases to prisons to private companies.

“Many of the prisoners had poor father figures when they were growing up and they say their misconduct is partially related to the absence of their fathers,” said Song Hyun-young, the team head at the public relations team of the Durrano Father School.

“Many Korean men still put the priority on their work and careers because that’s what they’ve learned from their fathers and grandfathers but we tell them that they are not born to bring home money. Rather, they are born to become good fathers and leave a good legacy for their children,” Song added.

The Child Fund Korea has branches nationwide and parenting classes are available at 5,000 won for a single session at selected branches.

“Since we are a charity for children, we believe that this kind of education will eventually prevent children from falling victim to child abuse,” said Jeong Hyo-jin, a person working at the charity.

Responding to initiatives by local governments to mandate parenting education, experts remain cautious about it.

Chung Shun-ah, a professor of child welfare and studies at Sookmyung University, said, “[The success] of parenting education will be highly dependent on what kind of content it will provide.”

Lee Su-jeong, a professor of criminal psychology at Kyonggi University, said that today’s parents are in a transitional period.

She continued, “They know that they are in need of new ways of parenting but they do not know what to do.”

“You can’t really stop some parents from killing or abusing their children with one or two sessions of classes. The local governments need to come up with personalized plans for the vulnerable group of parents who grew up with child abuse. Otherwise, education for all parents will be a waste of taxes.”