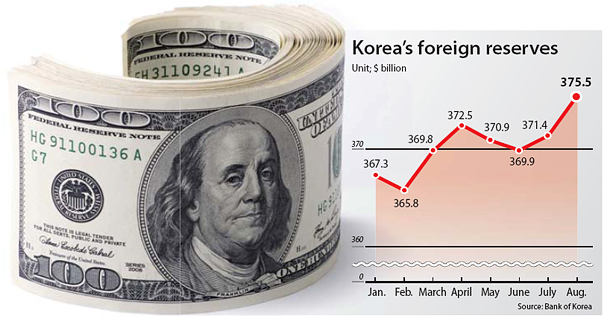 The last time the amount reached a high was in June 2015 when it posted $374.7 billion, the Bank of Korea (BOK) said Monday. Korea’s foreign exchange reserves rose for the two consecutive months since July, when it added $1.49 billion. It rose $4.08 billion last month.

“We were able to gain profit from the overseas asset management, including profits from the foreign stock market and interests,” said an official at the BOK. “Foreign exchange reserves also rose compared to the previous year as the value of non-dollar reserves rose due to the weakened dollar last month.”

In fact, the euro strengthened 0.7 percent and the yen rose 1.8 percent compared to the dollar last month.

The country’s reserve position at the International Monetary Fund rose $10 million to $1.81 billion last month. Korea is No 7 worldwide when it comes to the amount of foreign exchange reserves, as of the end of July. China is first with $3.2 trillion in reserves, followed by Japan ($1.26 trillion) and Switzerland ($685 billion).

Meanwhile, Korea’s foreign reserves shrank for four consecutive months between November 2015 and February before bouncing back in March and April. They dropped for two months from May to June and recovered again in July as the depreciation of the U.S. dollar affected the BOK’s yen- and euro-based foreign assets.