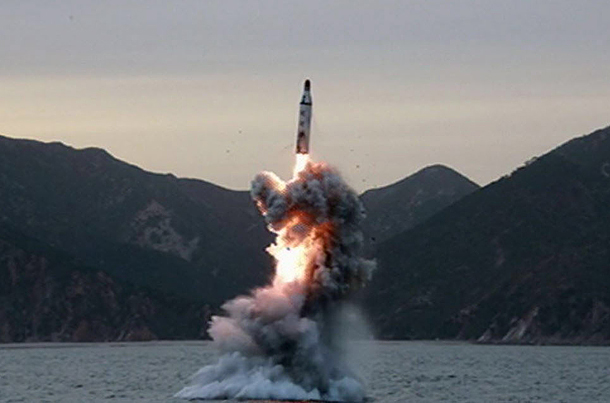 North Korea’s development of the submarine-launched ballistic missile (SLBM) was faster than the Korean defense ministry’s expectations. In April, right after the SLBM test launch, the ministry predicted that North Korea would be able to deploy the missile in two or three years. When North Korea successfully launched a submarine-launched missile on August 24, the ministry adjusted that estimate to one to three years. The expected deployment time has been moved up. The ministry underestimated how fast North Korea’s science and technology was developing.

It takes money and an educated workforce to achieve scientific and technological development. How did North Korea fund the research?

First of all, the money came from the pockets of the nouveau riche. They made money from North Korea’s distribution market, real estate, finance and leasing businesses. More than half of them are Chinese nationals. As they have families and relatives in China and can legally travel to China, they conduct legitimate and illegitimate deals between North Korea and China. They are sometimes accused of being China’s spies. But they are also the artery of the North Korean economy. The Chinese living in North Korea make up a considerable portion of North Korea’s market. As they cannot be involved in commerce directly, they have North Koreans acting on their behalf. They hire North Koreans, pay salaries and provide goods. A similar deal is made in Russia’s Primorsky Kray, Russia’s farthest south-eastern region.

Shops are operated by Russians, but Chinese people provide goods and pay salaries. It is an expedient measure, as Russia is checking on China’s advancement in businesses there.

China has also used a similar tactic to get involved in North Korea’s defense business, an area where capital and power tend to collude.

The educated workforce was helped by Russian scientists. According to intelligence officials, North Korea learned cold launching, a core technology in an SLBM, from Russia in 2012. The Korean and U.S. intelligence authorities detected this in the autumn of 2013. A U.S.

military satellite captured a hole in the Golf-class 2000-ton submarine that North Korea had acquired from the Soviet Union, and a vertical launcher installed near Sinpo port in South Hamgyeong Province. Now, the only thing left is to build a nuclear submarine on which to load the SLBM.

There are rumors that North Korea already has a nuclear submarine. Some claim that the purpose of activating the Yeongbyeon nuclear reactor was not to conduct a nuclear test but to make the nuclear energy needed for a submarine. Even if not, completion is a matter of time. If we underestimate Kim Jong-un’s speed, we will be surprised over and over again. We don’t need to overly fear them, but we must not look down on them.