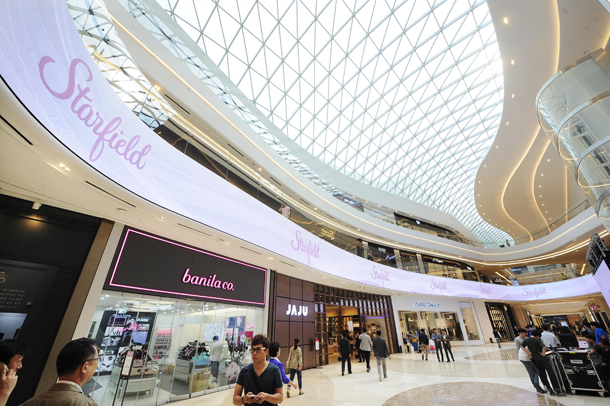 Starfield Hanam, Korea’s largest shopping complex in Hanam, Gyeonggi, southeast of Seoul, offers an extensive lineup of brands for shopping as well as entertainment facilities such as an indoor recreation venue and water park. It opens on Friday. [SHINSEGAE, JIN EUN-SOO]

The mall’s grand opening is scheduled for Friday.

“Starfield Hanam differentiates itself from other department stores or malls in metropolitan areas by infusing ‘entertainment’ factors to the complex so even male visitors can enjoy their experience here,” said Lim Young-lock, executive vice president of Shinsegae Property, which oversees the mall operations on Monday.

The seven-story shopping complex, erected on an 11,800-square-meter site in Hanam, Gyeonggi, can be divided into the Shinsegae Department Store section and the mall section.

Together, they own 750 brands; 40 percent of them are premium labels.

“Shinsegae was looking for a foreign partner and we were lucky to have worked together,” said Peter DeGalan, chief investment officer of Taubman Asia. “None of us would have done this if we hadn’t worked together.”

High-end labels such as Louis Vuitton, Prada and Bulgari have been added to the mall section. The first floor of the department store, a space traditionally reserved for luxury fashion houses, instead has a cooking studio and workshop center for families.

The parking lot can house 6,200 vehicles at a time. Comparatively, COEX mall in Samseong-dong can hold 4,700 and Lotte World Mall in Jamsil-dong can hold 2,756 vehicles. 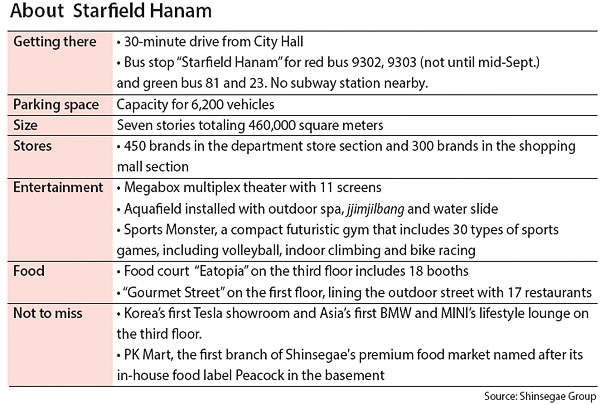 The second floor of the Starfield Hanam is designed for car lovers.

Hyundai Motor’s standalone luxury-car brand Genesis has established its first showroom where visitors can get a glimpse of its G90, G80 and its yet-to-be-launched G80 Sport. Visitors can also test-drive vehicles and receive consultations about purchases.

Luxury motorcycle brand Harley-Davidson opened its seventh Korean flagship store where not only can a Starfield-only model be purchased but also various fashion accessories associated with the brand.

Next door is Asia’s first BMW and MINI showroom, which also provides a one-stop consulting station which also sells items such as backpacks and keychains.

The much-buzzed-about showroom of Tesla Motors, the automaker’s first Korean store, is on the second floor, too, in between high-end fashion labels. It is scheduled to open in November.

The top floors - the third, fourth and penthouse - are dedicated to more dynamic or relaxing activities. A two-story water park Aquafield, which can be entered from the third floor, has a swimming pool, water slide, outdoor Jacuzzi and eight types of jjimjilbangs (Korean style bathhouse). Only 1,000 visitors are allowed inside at once. The entrance fee is 45,000 won for adults and 38,000 won for children for six hours during peak season.

Above: Tesla Motors will open its first Korean showroom in Starfield Hanam, scheduled for launch in November. Right: Sports Monster on the penthouse floor has 30 types of indoor recreational activities such as basketball, rope climbing and trampolines.

A recreational sports venue is set up on the fourth floor where 30 sports such as volleyball and basketball can be played on a LED-lit court that changes automatically depending on what sports you are playing. More extreme sports such as wall climbing, ropes and bike racing are available as well. The venue costs 23,000 won for adults and 18,000 won for children for a two-hour use.

There are two main spots where shoppers can stop for a bite. The Eatopia food court occupies one big corner on the third floor where some 18 restaurants have set up shop.

On the first floor, 17 restaurants line Gourmet Street, which is equipped with outdoor terraces.

Specialty retail brands such as E-Mart Traders, which emulates Costco-like factory-base retail platform and Electro Mart which specializes in electronic products can be found here, too. E-Mart’s in-house packaged food brand Peacock launched its own premium food market where ingredients and dining are both available.

Shinsegae Group said it hopes to raise 820 billion won within the next year and reach 5 trillion won in accumulated sales in the next three to four years.