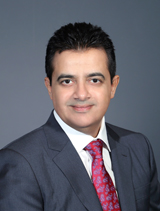 S-Oil, the domestic petroleum company, appointed Othman Al-Ghamdi as CEO in a shareholders and board of directors meeting at the company’s headquarters in Gongdeok-dong, western Seoul, on Monday.

Born and educated in Saudi Arabia, Al-Ghamdi has been the head of Saudi Aramco’s Seoul office since September. The state-owned Saudi Aramco, officially the Saudi Arabian Oil Company, is the country’s biggest shareholder of S-Oil.

“My goal is to realize a sustainable management environment through innovation and to do so, I will focus on escaping standardized thinking and actions,” he said in his inauguration speech.

His flexible management style of coping with rapidly changing market situations and his abilities as a global businessman, including his balanced view on Asian culture, was appreciated, S-Oil said.