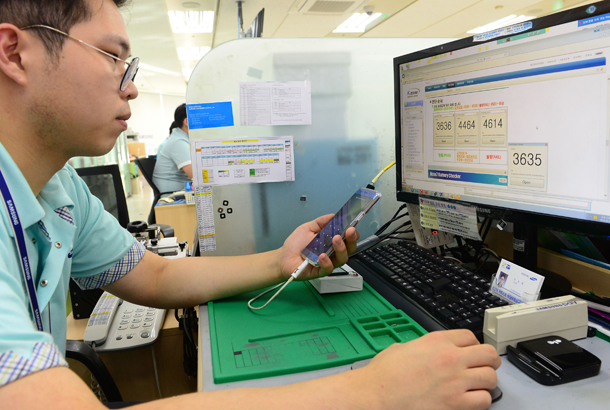 A worker at the Samsung Electronics service center in Jongno District, central Seoul, checks whether a Galaxy Note7 has any defect on Saturday. [NEWSIS]

Samsung Electronics has reportedly decided to halt its supply of Galaxy Note7 batteries from affiliate Samsung SDI in response to recent reports of the device overheating and melting, industry sources said Monday.

Neither of the two companies, however, officially confirmed the reports.

Koh Dong-jin, president of Samsung’s mobile business, confirmed Friday that the Galaxy Note7’s battery was the cause of several reported cases in which the device overheated and melted while it was charging. He offered customers the option of exchanging their Galaxy Note7, which could lead to an unprecedented recall of up to 2.5 million units that have been sold around the world.

Samsung Electronics, the world’s No. 1 smartphone manufacturer, said it had a contract with two battery manufacturers, its affiliate Samsung SDI and Amperex Technology Limited in China. The tech giant’s reported decision to halt battery supply from Samsung SDI would indicate that the sister company is to blame for the faulty devices.

Industry insiders say Samsung Electronics will not charge Samsung SDI for financial losses from the recall.

Nevertheless, the incident could deal a long-term blow to the battery maker’s image. Not only does the company supply products for small devices, but it also had grand plans to advance into the global market for electric-car batteries after announcing last month that it was building a factory in Hungary to take on European electric-carmakers.

According to a Samsung Electronics spokesman, employees voicing their concerns on the company’s internal message boards eventually led to Koh’s final decision to allow customers to exchange their devices.

Samsung Electronics has suspended sales of the Galaxy Note7 until the end of this month in order to focus on manufacturing new devices to accommodate exchanges. This is expected to deal a blow to the company in the smartphone market, with Apple’s iPhone 7 and LG Electronics’ V20, both expected to be unveiled this week.

Business Insider went so far as to call Samsung’s sales suspension a “gift” to Apple.

According to Lee Seung-woo, a researcher at the Industrial Bank of Korea, the total cost for Samsung cannot be precisely calculated at this stage.

Under the assumption that the company exchanges all 2.5 million units, the cost could reach up to $1.4 billion to $1.7 billion.

But if later, Samsung Electronics finds other ways to take care of the faulty devices, such as selling refurbished models or models that were fixed before purchase, the cost could go down to $460 million to $790 million, according to the researcher.

“It is true that the recall incident will cause a negative effect on Samsung Electronics shares, particularly regarding the fact that it happened just before Apple’s new unveiling,” Lee said. “But it is hard to say that this incident will lead the company into a long-term slump, because the share prices of competitors haven’t recorded much change after Friday’s announcement.”

Samsung Electronics shares saw a rise of 0.56 percent to close at 1,606,000 won ($1,453). Public relations specialists said the company earned points for its in-person apology from the head of the mobile business division and his promise of compensation as well as providing details of the product’s technical problem.