Lee warms up to Honam residents, offers an apology

Lee warms up to Honam residents, offers an apology 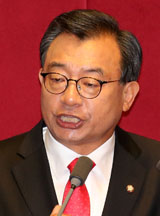 Chairman Lee Jung-hyun of the Saenuri Party proposed Monday a political alliance with the conservative ruling party’s traditional rival region of Honam and offered an apology for the decades of discrimination it and its residents have suffered.

“I am confident that Honam and the Saenuri Party can form a political alliance,” Lee said in his speech at the National Assembly. Lee, a close ally of President Park Geun-hye, was elected last month as the new chairman of the ruling party.

A three-term lawmaker representing Suncheon, South Jeolla, he is the first Honam politician to head the conservative party, which has been dominated by figures from the rival Yeongnam region. The regional rivalry between Honam and Yeongnam has long defined Korean politics.

“Honam is not progressive, extremist or radical,” Lee said. “The region also doesn’t belong to one particular party. I want to make peace with Honam not as a Honam politician who became the chairman, but as the chairman of the conservative Saenuri Party.”

Lee added, “The Saenuri Party, its predecessor and the conservative administrations in the past, discriminated against Honam and hurt the Honam people’s pride, whether it was their intention or not. As the Saenuri chairman, I apologize for this.”

He then asked the opposition parties, which control the majority in the National Assembly, to support the Park administration for the remainder of its term.

He also urged bipartisan cooperation when it comes to national security issues, particularly the Park government’s decision to allow the U.S. deployment of a controversial antimissile system to deter the North’s nuclear and missile threats. In addition, he asked the opposition parties to work with the ruling party on labor reform and passage of economic bills.

The opposition parties condemned Lee’s first speech at the legislature as chairman. “He disregarded the pending issues and concentrated his effort to promote the president’s agenda,” said Rep. Ki Dong-min, spokesman of the main opposition Minjoo Party of Korea. “To summarize Lee’s speech, he was asking us to make a rubber-stamp legislature.”

The People’s Party also attacked Lee for his speech. “He blamed the National Assembly and lawmakers without looking at the reality,” Rep. Son Kum-ju said. “His embarrassing speech reminds one of Park’s soulless language.”

Son also said it was an “extremely dangerous idea for Lee to define the people and opposition parties’ criticism toward the government as an attempt to defy the presidential election outcome.”