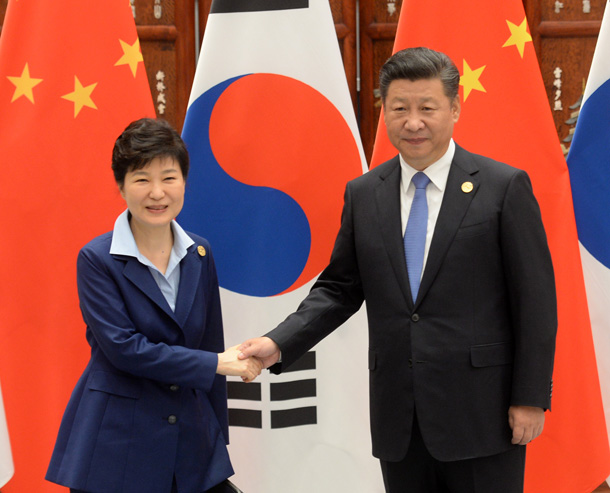 Park and Xi had a bilateral summit in the morning on the sidelines of the Group of 20 conference in Hangzhou, China. During the 46-minute meeting, the two leaders mainly discussed the escalating controversy over Seoul and Washington’s decision to place the Terminal High Altitude Area Defense (Thaad) system in South Korea. While Seoul and Washington repeatedly stressed that the antimissile system is to deter Pyongyang’s nuclear and missile provocations, Beijing and Moscow have shown concerns that its powerful radar will be used to spy on them.

At the meeting, the first since Seoul announced the deployment plan in July, Park made extensive appeals to Xi to defend her decision. She said the South Korean people’s concerns regarding the North’s threats are warranted, following the North’s long-range missile firing in June and submarine-launched ballistic missile firing in August. “The seriousness of the threats that we feel appear to be different from that felt by China,” Park told Xi.

“Because I carry the grave responsibility on my little shoulder to protect the lives of 50 million people, I was grappling day and night to find a way to protect the people from the North’s nuclear and missile threats.” Park told Xi, according to Kim Kyou-hyun, senior presidential secretary for foreign affairs and national security.

She also assured Xi that the Thaad will only be used to counter the North. “There is no reason and no need for it to infringe upon the security of a third country,” Park said. “Once the nuclear and missile issues are resolved, it will no longer be needed.”

Xi, however, made clear China’s opposition. “Mishandling the issue is not conducive to strategic stability in the region, and could intensify conflicts,” he was quoted as saying by China’s state-run Xinhua News Agency.

The Chinese leader has repeatedly stated his opposition to the Thaad deployment plan over the past months. His latest statement of disapproval came on Saturday during his summit with U.S. President Barack Obama.

While firmly opposing the Thaad deployment, Xi still expressed his hope that the security dispute should not further worsen Korea-China relations. After Seoul and Washington said the antimissile battery will be deployed by the end of next year, Beijing warned of economic retaliation against Seoul, and the impact of this has already affected tourism and performances by Korean celebrities in China.

According to the Chinese Foreign Ministry and Xinhua News Agency, Xi said the two countries are close neighbors with broad common interests and they should cherish their mutual trust, promote cooperation and overcome challenges in order to put bilateral ties on the right track toward stable and healthy development.

“China is willing to work [with South Korea] to better protect and advance their hard-won ties,” he said, expressing hope that the two countries strive to “expand cooperative and positive elements and put a lid on negative ones.”

According to the Blue House, Park responded positively to Xi’s remarks. She also proposed that South Korea, the United States and China must have a comprehensive discussion.

While the Blue House said no specific efforts are being made currently to realize her proposal for the trilateral discussion, it said the two leaders agreed to improve their strategic communication to resolve the North Korea’s nuclear arms development.

Xi also reaffirmed China’s commitment to realizing denuclearization on the Korean Peninsula and safeguarding peace and stability of the peninsula.