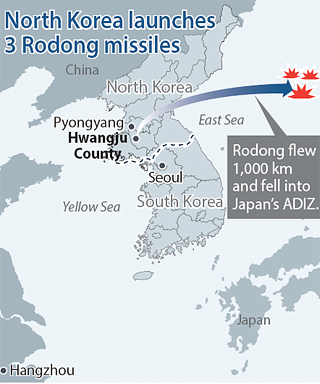 Pyongyang fired three intermediate-range ballistic missiles into waters off its eastern coast on Monday, according to South Korea’s Joint Chiefs of Staff (JCS).

The missiles were fired at around 12:14 p.m. toward the East Sea from western Hwangju County in North Hwanghae Province.

Military officials presumed all three to be intermediate-range Rodong missiles, which have a range of up to 1,300 kilometers (808 miles).

The eastern Chinese city of Hangzhou, around 1,024 kilometers away from Hwangju, would have been in range of Pyongyang’s Rodong missile. Pyongyang did not issue an advance warning to protect vessels sailing in nearby waters. The official added that U.S. and Korean authorities are working together to analyze the North’s launches.

This latest launch comes 12 days after North Korea fired a submarine-launched ballistic missile (SLBM), which flew some 500 kilometers eastward on July 24, landing in waters controlled by Japan. It also comes as G-20 leaders are gathered for a two-day summit in Hangzhou, China. This includes the leaders of South Korea, the United States, Japan, Russia and China, who are members to the long-stalled six-party talks to denuclearize North Korea.

Pyongyang fired the missiles just as President Park Geun-hye and Chinese President Xi Jinping’s bilateral talks on the sidelines of the G-20 summit came to a wrap. Pyongyang’s missile launches also come ahead of North Korea’s celebration on Friday commemorating the founding of the country on Sept. 9, 1948. Oct. 10 marks the 71st anniversary of the foundation of the North’s ruling Workers’ Party. Pyongyang staged a huge military parade to mark this occasion last year.

“North Korea’s ballistic missile launches again violate UN Security Council resolutions,” said the JCS official. “It seems to be displaying its nuclear and missile capabilities for the G-20 leader’s summit and the North Korean government’s founding day, and is a part of its show of force to continue the military tensions on the Korean Peninsula.” The official added that South Korea is maintaining a “full defense posture” against the North’s provocations.

Pyongyang previously fired three missiles from Hwangju, including two short-range Scud-type and one Rodong missile, on July 19, seen as a protest to Seoul’s decision to deploy the American Terminal High Altitude Area Defense system to Korea. It also fired a Rodong missile into waters that fall under Japan’s exclusive economic zone, or EEZ, on Aug. 3, which drew strong backlash from Tokyo. The 15-member UN Security Council last month released a press statement condemning four of North Korea’s most recent ballistic launches conducted in July and August.