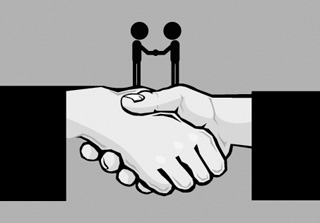 A diner I frequent has closed because the building’s owner demanded a steep hike in monthly rent upon seeing good business. A tented street bar nearby also moved out because of poor business.

The manufacturing front is equally dismal. Small and midsize enterprises are going under one by one. One of the reasons for their troubles stems from unfair business practices by large companies. Many large enterprises cannot earn enough to pay off interest on their debt. The Korea Inc. is in its worst state since the 1997 financial crisis that led to a humiliating international bailout.

The bad business cycle is not the only problem. Capabilities are also lagging. Growth in the past came as local players mimicked already-tested technologies and products of advanced economies. But now that Korean companies are mature enough they must compete on the same grounds as foreign powerhouses. But advanced enterprises have zoomed past with innovations, riding on the evolution of the fourth industrial revolution.

The Korean economy is hit by the double whammy of a prolonged global recession on top of a slowdown in the domestic economy. The traditional fiscal and monetary policy tools — ultra-low rates, abundant money supply, expansion in fiscal spending and tax benefits — have all proven ineffective. More farsighted prescription is needed.

In his 2015 essay, “The Principles of Economic Governance for Sustainable Development of Capitalism,” economist Cho Soon advised that the government must cement both economic and non-economic grounds to place the Korean economy on the path of sustainable development. The economic grounds include labor for production and smooth capital supply and demand, high standards in science and technology, balanced distribution in wealth and income and balance in investment and savings.

He listed education to polish the intelligence and virtues of the people, a strong and capable government and politics, a social order with harmony in competition and cooperation and a cultural environment breeding good traditions and customs as non-economic essentials. He claimed these invisible assets in the long run would become the foundation for the economy and nation.

Let’s examine the factors one by one.

First of all, capital should not be a problem as liquidity is ample due to expansive pumping from U.S., European, and Japanese central banks. But Korea lacks labor power especially in skilled fields. Science and technology standards are up-to-date in applications, but lagging in basic and inventive areas. Korea is the world’s fifth largest in research and development spending, but most goes to development and little to research. Research is the refinement of existing or borrowed ideas rather than original ones. In wealth and income distribution, Korea is ahead of the United States but behind Japan and European countries. The top 1 percent accounts for 15 percent of national income and the upper 10 percent has 47 percent.

Large companies have astronomical savings, yet are stingy in investment because they lack innovative and core inventions. Smaller companies have a lot to spend, yet are short in capital. If some of the money from large corporate hoards flow into smaller enterprises, the economy could grow more in balance. Sharing of excessive profit, preferential reservation of specific business sectors for smaller enterprises, and preferential placements of public procurement for small companies are some of the ideas to encourage symbiotic growth.
More attention must be given to bolster individual purchasing power to increase total demand. This could be done through an increase in minimum wage and more job stability by eventually placing irregular workers on permanent payroll.

Education is the most underdeveloped area. Enormous resources are spent on education, but they help little to breed people with healthy minds, quality knowledge and agility and creativity to respond to changes of the future. Elementary and secondary education must be focused on strengthening the body, virtue and mind instead of in the order of intelligence, virtue and body. The government must make more radical investments in universities as well as more freedom.

Politics has long lost public confidence. People are partly blamed for electing those skilled in politicking without qualifications to become political leaders. A national leader must present a detailed vision and action plans for the country’s development. For the goal, he or she must recruit the right kind of people regardless of political interests and win public trust.

Cooperation for mutual growth cannot be bred in a society where the compassion and piety of others are eclipsed by fierce competition.

In a normal society, honesty, justice, and self-reflection must be upheld as high priorities. But we have not established this tradition.

For sustainable development of the Korean economy, we must start from the beginning. There is no panacea or shortcut. The people must endure immediate cost and pain and leaders should abandon greed. It is the only way for shared growth.