Paul Bassett and the art of making espresso

Paul Bassett and the art of making espresso 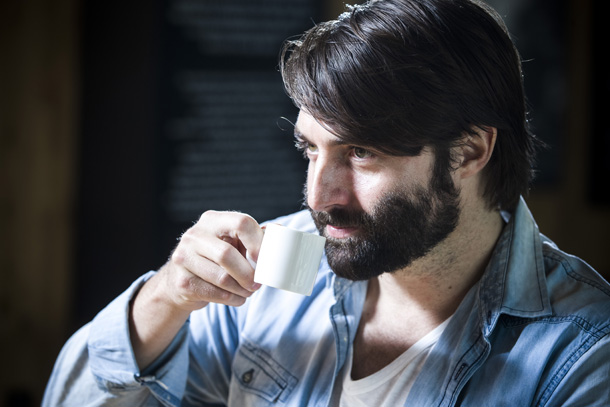 Paul Bassett, 38, a world champion barista from Australia with nearly 80 coffee franchises across Korea that bear his name, says “coffee is the essence of communication and connection.”

“There are so many lives involved in where coffee comes from as well, starting from those laborers who work at coffee farms, to young couples enjoying their first date,” he added.

This explains why he was invited to this year’s Culture Communication Forum, an annual event where cultural leaders from different countries with diverse backgrounds gather together in Seoul to experience Korea and hold a discussion. 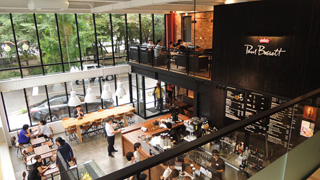 Maeil Dairies’ affiliate M’s Seed operates about 75 Paul Bassett coffee chains across the country. All baristas, according to the company, are trained in the skills of barista Paul Bassett so that coffee tastes the same in every store. Bassett also regularly visits Korea to train baristas as well. [MAEIL DAIRIES]

As part of its corporate social responsibility, Paul Bassett sponsors one child per store through World Vision, in countries where they source their coffee beans including Ethiopia and Brazil. Basset, who met with the Korea JoongAng Daily on Saturday for an interview at the Paul Bassett Hannam Coffee Station in Hannam-dong, central Seoul, explained that “this is just one example of how Paul Bassett communicates with people through coffee.”

“Doesn’t real delight come from communicating with people and giving?” Bassett said. “Each store sponsors a child with its budget but young baristas in their 20s and 30s exchange handwritten letters and communicate with these children.” The company also noted that in the past, workers have used their own money to purchase presents for the children they sponsor.

After winning the World Barista Championship in 2003, Bassett opened a small cafe in Japan. After a visit by Maeil Dairies Industry Chairman Kim Jung-wan, a business deal was proposed, leading to the birth of the Korean coffee chain in 2009.

The company’s affiliate M’s Seed collaborated with the barista champion and opened the first store in the Gangnam branch of Shinsegae Department Store, southern Seoul in November 2009.

Once cafes grow bigger and become large franchise coffee chains, they tend to compromise on the quality and specialty of their coffee. In that regard, Paul Bassett, has maintained its image of professionalism despite its rapid expansion.

According to M’s Seed, this is because all baristas in Paul Bassett locations are trained, sometimes by Bassett himself, to acquire his know-how and skills in coffee making, so that every cup of joe tastes as great as Bassett’s.

When this reporter asked if she could try his cup of espresso - Bassett’s specialty - the barista willingly got up on his feet and showed off his prize-winning espresso-making skills.

After putting on a clean black apron, Bassett stood in front of the espresso machine, cleaned up his area and checked if everything was set to go. After grinding the fresh beans, he began extracting the coffee, but instead of filling up the cup, he let it drain.

“This is called ‘seasoning,’” Bassett explained. “Because I’m using this machine for the first time today, I am letting the first one just drain to see the color change and the speed.”

The second extraction, after another round of freshly ground beans and pressing of the surface, was also not for the reporter.

“This one is for me to taste to see if there needs to be any adjustments,” said Bassett, taking a sip. Finally, the third extraction was given to the reporter.

Paul Bassett’s espresso is called a “dessert-style” and only serves the “essence” of the coffee - the first 25 milliliters (0.8 ounces) of the extraction.

“Usually, some consumers who are used to drinking regular espresso say our serving is too small but we insist on serving this dessert style espresso because Paul Bassett is great at making it,” said Suk Jae-won, CEO of M’s Seed.

“Usually, about 18 to 19 grams (0.6 ounces) of coffee beans are ground for a cup of espresso in regular cafes but for this type, we use about 25 grams of coffee beans.”

The key, says Bassett, is the taste.

“This dessert style espresso has a very sweet dessert taste,” said Bassett. “You can even taste the sweet chocolate and there’s this almost nice ripe stone fruit taste and great texture for the mouthful as well.”

Q. Starting with a personal question, why did you become a barista?

A. I grew up in restaurants. My parents were restaurateurs. My father was an excellent chef. He was a perfectionist at heart, he was very disciplined and creative.

Growing up in this environment, it set the tone for what was to come down the track. I have a lot of similar characteristics as my dad, although I don’t throw pans around the kitchen like he used to. Coffee suited my personality as well. We sort of found each other in a way. [When I became interested in coffee], it was at a time when coffee still had so much more potential. It allowed me to explore the potential of coffee.

It was really exciting for me to try and understand all the different variables and being really curious about what impacts taste. And now, I’m able to share this with other people.

You said your strength is in making espresso, which you said is the most difficult coffee to master. Why is that?

It’s easy to disguise with the milk. But you have nowhere to hide with the espresso. Because espresso is concentrated, any flaws will be exposed. But, once you get espresso right, and you add great milk to it, you’ll have the best coffee.

Making a cup of coffee seems to require so much work, from selecting good beans to setting the right temperature for the machine and grinding the beans the right size and so on. For you, among all those steps required, what can you never compromise?

When you look at a cup of coffee, it is sum of all the parts come together. Not one component is necessarily more important than the other.

What I’m trying to say is that, you can taste every little thing that affects the taste so it’s really hard to say one thing is more important than the other. But if I have to pick one, for me, you have to start with amazing coffee to begin with. You can’t turn average coffee beans to something special. You’ve got to have really good coffee to begin with because that’s the potential. But you also have to remember that no matter how great the coffee bean is, it can be destroyed at any point after that.

First of all, our coffee is mainly from Ethiopia and Brazil. Higher quality coffees will have really interesting characteristics. They’ll also have very little defects, whereas, lower grade coffees will be mixture of all the coffee that didn’t make the “higher grade.”

So these higher quality coffee beans are the coffees that we are sourcing. They’ve got personality which is reflective of where the coffees come from. So the “best cup of coffee” is coffee that brings those personalities to life, in a way where you are not roasting the coffee so dark that all you taste is the roast character. The philosophy is in expressing the coffee, not anything else.

There’s no “Americano” in the menu. Instead you sell Lungo. Why?

It’s just a different name. From my experience, Americano is what the Italians call long black or lungo. It’s basically an espresso with hot water. Americans were served “Americano” in Italy because I think a lot of the times espresso was too strong for them. So this is where Americano got its name. Lungo, which means ‘long’ in Italian, is the same as Americano and Australia’s long black. They are simply variations on the same thing.

Paul Bassett is famous for its milk ice-cream. Have you tried it? And don’t you feel intimidated that the ice-cream may outsell coffee?

Of course I did. It was great. It’s even organic so there’s a great story behind it too. But I’m not intimidated by its popularity because the hero is always the coffee. Many cafes are selling other types of beverages to approach more customers but those products don’t overshadow the hero. This is the trend and most of the western cafes have adopted this.

So I guess you didn’t have any issues when Paul Bassett decided to sell beer early this year, because it did cause a stir from coffee diehards. Were you aware of this?

I don’t think it’s a problem at all. Of course a cafe must function as a cafe and never lose its identity but seeking diverse complementary products is a good way to go. Beer is one type of beverage and so is wine. I believe it’s important to meet the diverse needs of consumers.

Paul Bassett is also known for its latte and its strategy of allowing customers to select different types of milk was well appreciated. How did this start?

We found this was [what Korean customers wanted.] Normally, consumers only had a choice of two, a regular or low fat. But many Koreans are lactose intolerant so we decided to add one more option for them as well so that they can enjoy a cafe latte as well. We are also adding one more milk option next month.

For you, what is coffee?

What’s next on your itinerary?

As a barista, I’ll continue to explore and research coffee. As the ambassador of the Paul Bassett brand, I will make efforts to expand my connection in the coffee and beverage market as well. One of them includes the coffee classes I started for Korean consumers so that I can meet with them, connect and spread good coffee culture.