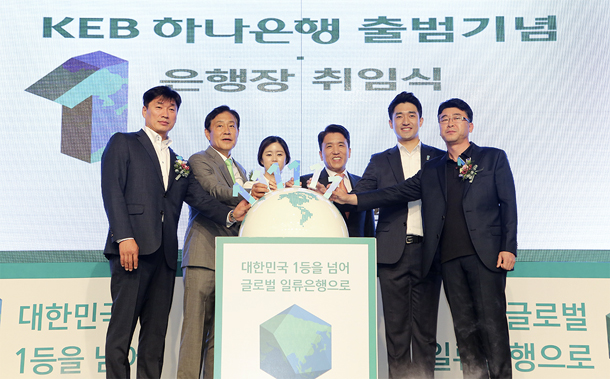 One year has passed since Korea’s largest bank by assets came into form with Hana Financial Group’s takeover of Korea Exchange Bank, and though the combined KEB Hana Bank has integrated its online and brick-and-mortar services, consolidating the staff has proven more difficult, mainly due to the former banks’ labor unions and differing corporate culture.

In June, KEB Hana completed one of its key tasks: integrating its electronic banking systems. By then, the bank had already finished merging all regional branches, raising the total number to over 900 across the country.

During an event marking the first year of the merger last week, Ham Young-joo, CEO of KEB Hana Bank, acknowledged that the process was challenging.

“I know all workers went through hardships and made efforts to make [the merger] work,” Ham said. 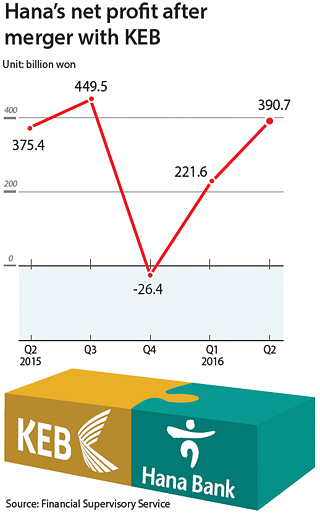 On the earnings side, the banking unit did a fair job by securing the number one position by assets during the second quarter this year.

Hana Financial Group, the holding group governing KEB Hana and other financial affiliates, saw losses in the fourth quarter last year because of different costs associated with the merger, but it has since recovered to post 799 billion won ($722.5 million) in net profit for the first half of this year.

Still, KEB Hana faces unresolved questions including how it will consolidate its two separate labor unions and its payment systems. Industry watchers said that resolving the labor issue, in particular, is vital in creating internal stability.

During his message marking the new year earlier in January, CEO Ham made combining the labor unions this year’s goal, adding that the separate unions get in the way of establishing a unified salary system for the whole bank.

Workers of KEB Hana are currently paid based on the salary system of the original unit to which they belonged, either Hana Bank or Korea Exchange Bank.

The labor union representing workers formerly under the Korea Exchange Bank said the time is net yet ripe to form a unified labor union.

“To build a combined labor group, building trust is a prerequisite,” said a member of the union who requested anonymity due to the sensitivity of the issue. “But we have not yet formed such trust-based relations, and the management has often failed to keep its word with the labor union.”

The source said that 99 percent of former Korea Exchange Bank staff are currently registered as members of the labor union.

The conflict between the two parties intensified when Hana Financial Group tried to push for an early merger with Korea Exchange Bank.

When it first bought a majority share of the bank in 2012, Hana Financial Group promised that its management could remain independent for five years.

But Hana Financial Group pushed for an earlier merger, arguing that deterioration in the banking environment required it to maximize competitiveness.

Hana Financial Group estimated in 2015 that the deal would allow the unit to save up to 300 billion won through 2017, but analysts still remain skeptical on the long-term outlook.

“It is still too early to say that KEB Hana is enjoying synergy effects through the combination of physical branches and exchange of personnel,” Kim In, an analyst at Eugene Investment & Securities, said in a report.

“The process has cost some 300 billion won so far. The benefit of the combined IT system will likely come off in the second half of this year. But a long-term synergy remains to be seen.”