Emergency cash raised to help out in Hanjin’s crisis

Emergency cash raised to help out in Hanjin’s crisis 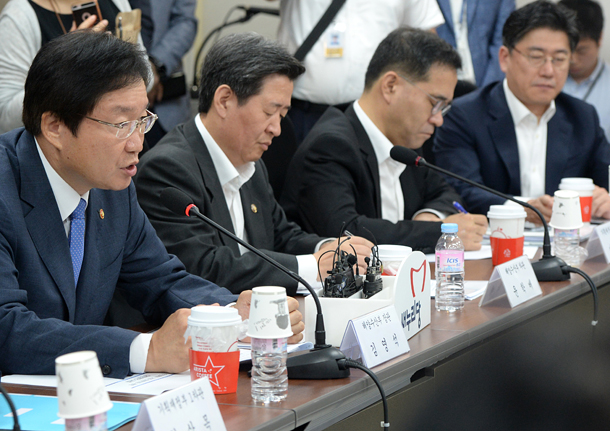 Kim Young-suk, left, minister of oceans and fisheries, explains to lawmakers of the ruling Saenuri Party how different government departments are working to contain the impact of the Hanjin Shipping crisis during a meeting held at the National Assembly in Yeouido, western Seoul, on Tuesday. [NEWSIS]

Hanjin Group is ponying up 100 billion won ($90.37 million) to support ailing shipper Hanjin Shipping, and the ruling Saenuri Party and government jointly announced a conditional plan to lend the company around 100 billion won if it puts up suitable collateral.

“People and cargo are trapped inside stranded ships, and there’s no time for us to wait for government officials to weigh their options,” a spokesperson from Hanjin Group said. “We will deliver the announced amount of support cash through our lawyer as soon as possible.”

“The shipper is already under the control of the Seoul Central District Court,” said Hanjin Group in a statement Tuesday. “The group made the decision to minimize damage to exporting and importing companies [due to the logistics disturbance].”

The money will be delivered to the court, as Hanjin is under court receivership. It is supposed to be used to free up cargo stuck on stranded or seized vessels.

According to Hanjin Shipping, of the total of 141 vessels it operates, 66 container ships and seven bulk ships are either seized or have been denied entry or departure from ports as of Monday night. Some 44 ports in 23 countries are affected.

As of 9 a.m. Tuesday, 119 cases of logistics disturbances were registered with the Korea International Trade Association, a business lobbying group promoting Korean companies’ international trade, leading to over $40 million in losses.

Many other parties are impacted by Hanjin’s halted operation including owners of the ships Hanjin leases and the companies shipping or expecting to receive the cargo on them.

The Korea Federation of Small and Midsize Enterprises (K-BIZ) held a meeting with Minister of Oceans and Fisheries Kim Young-suk Tuesday to ask the government for a stabilization fund for emergency management of the situation.

SMEs engaged in the shipping business, such as tugboat operators and cargo loading agencies, are suffering from delayed payments, cargo being stuck, and various other extra expenses. For instance, eight tugboat operators have unpaid bills of 1.7 billion won owed by Hanjin Shipping, according to the Korea Tug Business Association.

There are also concerns about the crew on the stranded vessels. The court announced Tuesday that the company can pay expenses of less than 100 million won without its approval to deliver necessary supplies to crews onboard.

According to the Ministry of Oceans and Fisheries, a total of 820 Hanjin crewmen - 342 Koreans and 478 foreign - were at sea as of Tuesday.

As ships usually take food and other necessary supplies for about 15 days, crews will be out of resources by next week.

The Oceans Ministry started supplying food, water and basic commodities to shipping crews from Tuesday. Six ships including the Hanjin Europe, currently berthing in Rotterdam, and the Hanjin New York, which is in Singapore, will be the first recipients of the supplies.

“As Hanjin Group directly funded Hanjin Shipping and the shipper also filed for bankruptcy protection in major countries including United States and Japan, the most urgent problems can be taken care of and logistics disturbances may ease a bit,” said Lee Ki-hwan, a professor at Korea Maritime and Ocean University, who teaches shipping business management.