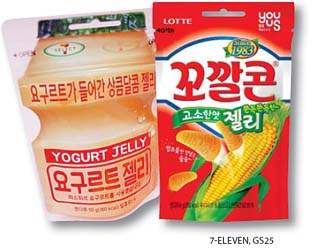 The gummy market is expanding as convenience stores are releasing their own private-brand gummy candies.

Gummies, also known as jellies, are gelatin-based, chewy candies such as gummy bears or jelly beans that are often fruit-flavored and made primarily of sugar.

GS25 is said to have started the product’s development after seeing how well gummy products were selling in its convenience stores. The growth rate of gummy sales in GS25 stores for the last three years was 44.8 percent in 2014, 54.1 percent in 2015 and 58.4 percent this year.

This year’s growth rate was calculated from January to August and was compared to the same period last year.

The company also noticed that the top five best-selling gummy products all had fruity flavors, such as Haribo’s Goldbaren and Vidal’s Banana Jelly.

It was therefore GS25’s intention to introduce a new kind of gummy flavor, which is what prompted the company to develop a gummy based on corn.

According to industry insiders, gummy candies have gained popularity among adults as foreign brands such as Haribo have made their way into the Korean market.

But GS25’s You Us Kkogalcorn Jelly is not the first private-brand gummy to be released by a convenience store. In May, 7-Eleven released its Yogurt Jelly, creating a surge in demand comparable to that of Calbee’s enormously popular Honey Butter Chip in 2015.