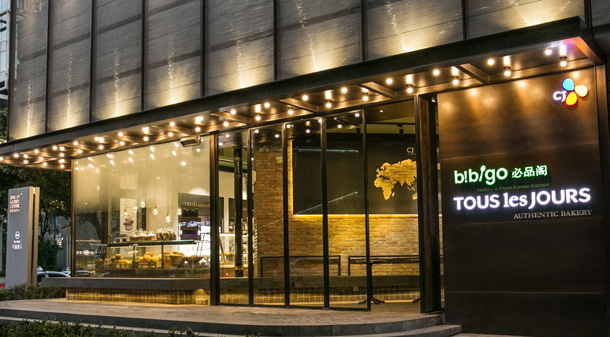 Korean bakeries, restaurants and cafe chains are expanding rapidly overseas, as the popularity of Korean and Korean-inspired fusion cuisine continues to grow worldwide.

CJ Foodville on Tuesday announced that it has opened branches of its bakery chain Tous Les Jours and bibimbap (mixed rice bowl) restaurant Bibigo in Shanghai’s Jing An Kerry Centre.

At its new branch, Tous Les Jours is experimenting with a set of “premium” services that includes brunch menus and a juice bar offering freshly-made vegetable drinks to compete against other food and beverage sellers in the shopping complex.

This is the first time a juice bar is being installed at a Tous Les Jours branch. CJ Foodville said it hopes the feature will attract young health-conscious Chinese consumers from the area’s surrounding office buildings.

The juice bar’s performance will determine whether CJ Foodville will expand the service to other Tous Les Jours branches overseas, the company said.

CJ Foodville has also opened its second Shanghai branch of bibimbap restaurant Bibigo in the Jing An Kerry Centre. The branch comes just one year after Bibigo first stepped foot in Shanghai, and the company said its second branch will feature a more diverse menu to attract wealthy residents who live nearby.

CJ’s newest outposts in Shanghai’s Jing’an District are part of a global expansion of food companies offering Korean and Korean-inspired fusion cuisine. According to the Ministry of Agriculture, Food and Rural Affairs, 138 Korean companies were operating 4,656 branches in 44 countries as of 2015, a 25 percent increase compared to the previous year and a 470 percent surge from 2010.

One of the most ambitious food companies expanding overseas is SPC Group, known for its bakery chain Paris Baguette, which has over 200 stores overseas, including in China, Vietnam, Singapore, the United States and even France, where the brand got its inspiration.

This is an exceptional expansion considering that the first overseas branch of Paris Baguette opened in 2004 in China. Today, the bakery can be found in major global cities from New York to Paris, offering its array of Western-style baked goods inspired by the Korean palate.

“Obviously, many of their baked goods are Asian in some way, so that’s a little unusual,” said Michael Lau, a 40-year-old New Yorker. “You don’t see baked goods sold at Paris Baguette in American bakeries.”

The company currently operates 45 Paris Baguette bakeries in the United States, seven of which are located in Manhattan, New York.

The bakery’s most recent branch opened in Chengdu, the capital of China’s Sichuan Province, in August. Three months before that in May, SPC Group opened its first franchised Paris Baguette in the United States in San Jose, California, raising expectations that the brand might expand with higher speed in the U.S. market. Before, the company directly operated its branches in the United States.

Before seeing financial difficulties this year, Caffe Bene was one of the fastest-growing Korean brands to set up overseas branches. The coffee chain once had 1,000 stores in 12 countries but ran into management troubles due its fast expansion.

Caffe Bene still operates 47 stores in the United States and is expected to establish more branches after the company secured a 16.5 billion won in ($14.91 million) investment from Singapore’s Food Empire and Indonesia’s Salim Group.

“While we expect an increase in demand for Korean food [like bibimbap] with the Korean Wave still popular among foreign consumers, the non-Korean food offerings [like coffee and baked goods] of domestic brands are expected to grow faster for the time being, as the latter is more familiar to them,” said an official at the Ministry of Agriculture, Food and Rural Affairs.