‘ICAPP contributes to the spread of democracy in Asia’

‘ICAPP contributes to the spread of democracy in Asia’ 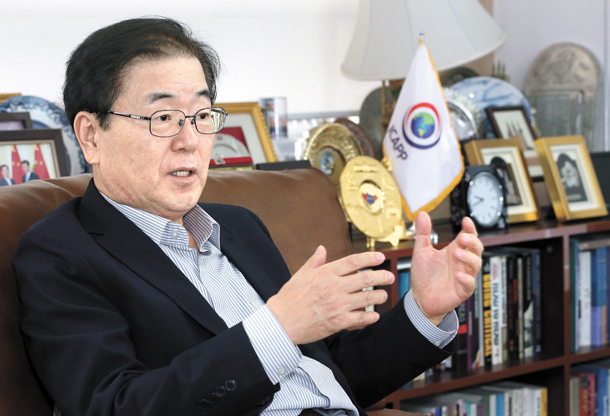 They were gathered to attend the 9th general assembly of the three-day International Conference of Asian Political Parties (ICAPP), which was held from Sept. 1 to 3.

The JoongAng Ilbo conducted an interview with Chung Eui-yong, 70, the secretary-general and co-chairman of ICAPP, ahead of the assembly at the organization’s Seoul office on Aug. 27 in Gwanghwamun, central Seoul.

Chung, a former diplomat and lawmaker, pointed out that the Ministry of Foreign Affairs is too passive in supporting public diplomacy efforts of civilians and also shared the role of the ICAPP in encouraging a multiparty system and promoting democracy. 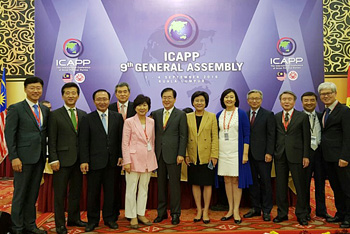 The ICAPP was first launched in Manila in 2000 in an attempt to promote cooperation between political parties, regardless of ideologies, from countries across Asia.

More than 360 political parties from 52 countries are member to the ICAPP. The 2006 General Assembly was held in Seoul.

An ICAPP Media Forum, which was launched in a statement in Seoul in September 2015, will be hosted by Korea next year.

Chung previously served as ambassador to Israel and Geneva, served as the chairman of the International Labor Organization (ILO) and became a lawmaker of the liberal Uri Party in 2004.


The following is an edited excerpt of the interview:


Q. What has the ICAPP contributed?

A. I believe that it is contributing considerably to the proliferation of Asia’s democratic system. It is especially expanding democracy based on a multiparty system. We have opened doors to all political parties. This time around, with 86 political parties from 36 countries, even a small country such as Maldives was represented by several political parties.


Do you think that is enough to expand pluralism?

For example, when Nepal enacted its democratic constitution [in 2015], it requested the ICAPP to mediate rather than the United Nations, and we offered our aid. Nepal’s three political parties were sharply divided and did not meet with each other. However, it was greatly thankful that we were able to gather all of them together in one place.


So, political parties meet for the first time through mediation by the ICAPP?

Yes, that happens quite frequently. In 2014 in Sri Lanka, we convinced President Mahinda Rajapakse to host the ICAPP general assembly along with the opposition party. At that time, the opposition party leader said it was the first time meeting with President Rajapakse in several years. Afterward, the government changed last year.

In 2013, during Myanmar’s military government, the Union Solidarity and Development Party and the ICAPP standing committee adopted a joint statement calling for the promotion and protection of human rights and establishing a democratic system through a multiparty system. The process was not easy. In preparation for that meeting, I flew to Naypyidaw twice that year.

Recently, it has not been much present, but in the past, it has been quite active. Usually, a vice-director level official of the North Korean Workers’ Party attends. In May 2015, we hosted a special conference on regional cooperation in Vladivostok, and a Workers’ Party vice director attended.


The North Korean nuclear issue has been dealt with as well.

We have adopted a statement calling for the problems between North and South Korea, including the nuclear issue, to be resolved peacefully through dialogue peacefully the related parties. But the ICAPP is not a place for regional, especially bilateral disputes to be discussed or mediated. It’s a place where opinions are exchanged on how to resolve joint tasks in the region together. There is a mutual understanding of this principle. However, in December 2010, the 6th general assembly held in Cambodia followed right after the Yeonpyeong Island shelling, so the North and South Korean representatives made remarks critical of each other. That is why my position, as I presided over the meeting, became very awkward.


What sort of relationship do you maintain with the Ministry of Foreign Affairs?

I worked at the Foreign Ministry for a long time, but the ministry needs to seriously reflect on the public criticism of being too exclusive. With an open heart, it has to mobilize all the diverse diplomatic capacity it has domestically. The Foreign Ministry has recently emphasized public diplomacy, but we need to more actively make use of the diplomatic assets that we have.


There is no significance in just meeting at the ICAPP, so isn’t there need for organic cooperation within Korea as well?

I wish we can receive a budget and personnel from the Foreign Ministry and be able to cooperate organically. However, it was regrettable that the Foreign Ministry has been so passive. Luckily, starting from this year our government’s prime ministers’ office decided to support the activities of the ICAPP secretariat and provide a budget, so other countries are grateful as well.


How stable are foreign policies that are decided upon by politicians?

There are limitations. However, politicians have a considerably pure side as well. When I was a representative with the Uri Party [the precursor to the liberal Democratic Party], I served as the Foreign Relations Committee chair. Even though my thoughts were extremely different from the party leaders, however before a decision, they always listened attentively to my opinion. I was very thankful for that.


Your opinions on the South Korea-U.S. free trade agreement and the North Korean human rights issue differed with them?

I said that extreme language shouldn’t be used toward Japan, and the when we resolved Korea-U.S. issues, we had to be cautious in the words we used. For example, when we drafted a motion to send troops to Iraq, it read as, “We didn’t want to send our troops but the United States requested it, so we are doing so.”


You had friction with former President Roh Moo-hyun as well?

Generally, it is known that former President Roh caused a lot of problems for the Korea-U.S. alliance, but he smoothly resolved large pending issues such as the deployment of troops to Iraq, strategic flexibility of the U.S. Forces Korea, relocating the USFK base and the Korea-U.S. FTA. However, his diplomatic language was rough, which drew unnecessary misunderstanding from the U.S. and domestic public.

For example, at a Blue House policy meeting, then President Roh said, “The Korea-U.S. FTA is a very good thing, but how should it be explained to the people?” So I explained, “It would be the best if the president does it. You should do it yourself. You have done well until now.”


You must have conveyed it in an easy-to-understand way.

Yes, he did not make one mistake and conveyed it accurately. On the FTA, President Roh really spoke well.


Why did you think to become a diplomat?

When I was a second year in high school, I won a national English debate in 1962 and attended a youth debate hosted by the U.S. newspaper New York Daily Mirror. At that time, I got to attend a high school in Chicago for a month and a half. That was the occasion. Then I enrolled in the Seoul National University’s department of international studies.


And how did you get involved in politics?

I still do not know. In January 2004, I returned after completing my post as the ambassador to Geneva. At that time, I served as the chairman of the International Labor Organization (ILO), and returned to Geneva in March of that year for a meeting of the governing body.

Some 20 European and Middle Eastern ambassadors were arguing in my room over the issue of forced Israeli laborers in Palestine, when I received a phone call from Seoul. I was asked why I was out in Geneva and what the ILO was. And I was asked, “Oh, so you the chairman of an international labor organization?” I guess that served their purpose. They were reviewing several proportional representatives at that time, and several days later, I was announced as a candidate.