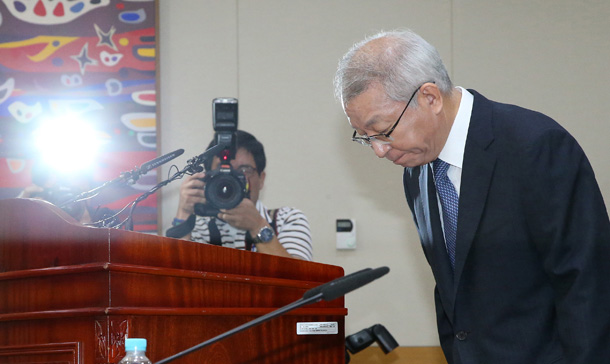 Chief Justice Yang Sung-tae of the Supreme Court bows his head in apology to the public in the Supreme Court in southern Seoul on Tuesday for the recent arrest of senior judge Kim Soo-cheon on charges of bribery. [PARK JONG-KEUN]

Chief Justice Yang Sung-tae of the Supreme Court apologized to the general public on Tuesday for the arrest of Kim Soo-cheon, a senior judge of the Incheon District Court, on charges of bribery.

“I apologize on behalf of the judiciary for burdening the citizens,” Yang said during a meeting of chief and senior judges on Tuesday. “The judiciary will take strict measures according to the outcome of the investigation.”

The last time a chief justice of the Supreme Court apologized to the public over a corruption scandal involving a legal professional was 10 years ago, when former Chief Justice Lee Yong-hoon apologized for the arrest of Cho Kwan-haeng, former senior judge of the Seoul High Court, for receiving bribes from a broker.

“The people most affected by the incident are the citizens who continued to support the judiciary through the ages and expected the court to be the beacon of justice in our society,” Yang said. “I hereby bow my head to the people and apologize.”

He added, “That a judge violated the basic code of ethics by which he or she must abide, and that he is a senior judge, part of the central system of the judiciary, is shocking for all of us.”

Judge Kim Soo-cheon is accused of taking bribes worth some 170 million won ($153,820) from former CEO of Nature Republic, Jung Woon-ho, who was embroiled in an illegal gambling scandal last year followed by a string of additional violence and lobbying charges this year. Kim has been detained since Friday.

According to prosecutors, Jung sold Kim his Range Rover SUV for 50 million won in 2014. Evidence surfaced that Jung may have returned the 50 million won to Kim last year, prosecutors said, raising suspicions that the car was a bribe.

Jung and Kim are reportedly friends and even went on a trip to Vietnam together, with Jung allegedly footing the bill. The prosecution also found evidence that some five to six checks, each worth 1 million won and issued in Jung’s name, were transferred to a bank account belonging to one of Kim’s relatives. Kim is also accused of handing down a favorable ruling in three court cases about cosmetics retailers selling goods copying those of Nature Republic cosmetics, violating the Trademark Act.

In apologizing on behalf of the judiciary, Yang said the responsibility lies not with any one judge.

“We should not avoid facing what has happened,” he said, “or think that illegal actions like those committed by the judge are limited to only a group of legal professionals.”

The prosecution probe into Jung has thus far revealed that judges, brokers and lawyers may have received bribes from Jung to lobby legal professionals on his behalf. The probe even spilled over to the Lotte Group founder’s eldest daughter, Shin Young-ja, who is accused of receiving bribes from Jung and has been indicted on corporate malpractice and embezzlement charges.