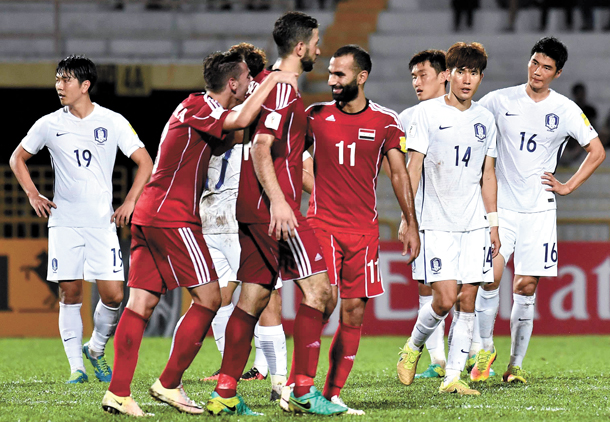 While Syrian players came out of the 0-0 draw against Korea satisfied, Korean players were frustrated by the result as many had expected an easy, landslide victory. Korea will host Qatar next in early October before taking on Iraq. [NEWSIS]

Shooting for an easy entry into its ninth straight World Cup, Korea instead floundered for 99 minutes against Syria on Tuesday in a match that was expected to be a landslide victory. Uli Stielike and the squad could not break the stalemate and walked heavy-hearted out of the Paroi Stadium in Seremban, Malaysia, after they were held scoreless at 0-0.

Before the match started, Stielike was confident. “This is a match between a team ranked 48th and a team ranked 105th,” the manager said before the game. “I don’t mean to pressure my players but I trust the result will more than reflect the difference in rankings between the two teams.”

Korea out-possessed the Syrian team throughout the match, 66-34 in the first half and 65-35 in the second half. The Korean side also out-shot Syria 6-5, but it actually fell behind the Middle Eastern team in the number of shots on target at 2-4, which means Syria’s offensive effort was more effective.

In the first half of the game, Korea could not penetrate the Syrian side of the pitch, unable to break Syria’s suffocating defense.

In the second half, the Korean players looked out of gas. Shots were off by miles and those that traveled near the goal were rejected by Syrian goalkeeper Ibrahim Alma. Granted, Son Heung-min, the pillar of Korea’s offense, was absent from the game, but the Ki Sung-yueng and Lee Chung-yong duo, who both play in the English Premier League, were thought to be more than enough for Korea to take down Syria. In reality, however, they looked helpless.

More troubling than players’ stamina, or lack thereof, was the fact that Korea was short on substitutes to relieve those exhausted players.

Stielike only took 20 men with him and when he announced the roster on Aug. 22, he said the number was going to be more than enough. But it was obvious that Stielike had to rely heavily on starters such as Ki and Lee, many of whom played full time against China just a few days ago. Some pundits pointed out that had Stielike filled up the roster with 23 players, adding players from the K-League who are at their peak condition, it would have been much easier to run the team and give players more time to breathe.

Another gaping flaw was Stielike’s analysis of the Syrian team before the match.

“Looking at their recent games,” he said, “Syria is not a defensive team and we expect an intense, offensive game.” But once the match started, Syria concentrated its men on defense and rarely made their way near the Korean penalty box, except in those few occasions for counterattacks. Stielike also said they would create scoring opportunities with sharp through passes and tactical movement among players, but players couldn’t create the necessary space to open up scoring chances, largely due to fatigue, it seemed, and the team ended up sending unnecessary horizontal and back passes.

After the game, Syria was more than satisfied with the result.
“I want to congratulate the Syrian people on a good result,” Syria manager Ayman Alhakim was quoted as saying according to the Asian Football Confederation. “We held a strong Korea Republic team to a draw and we worked very hard to do so. Today, we played a really great game.”

The skipper added, “If we continue to play like this, then we can collect more points and who knows what can happen? This result will give us confidence as we look forward to the next games. There is no need to fear anyone in this group if we play with the same spirit and determination.”

But clearly the outcome of the match was not what Stielike had in mind.

“I am not satisfied with the result as we came for a win,” he said. “We started both the first half and second half well. The players were receiving the ball and passing it smoothly, but we didn’t take our chances and we started to misplace our passes. At the start of the second half, we had a good chance to score and did not take it. The opposition made it difficult for us by wasting time. We had talked about this before the game but it was tough.”

Stielike added, “There are still eight games to play and many points to play for and now we have to prepare for the next game against Qatar.”

Korea will host Qatar next on Oct. 6 at Suwon World Cup Stadium for the third match of the campaign to the coming World Cup. After the match against Qatar, they will travel to Tehran to take on their archrival Iraq.