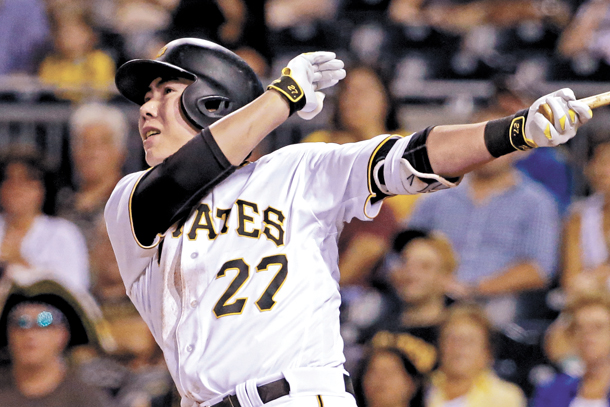 The Pittsburgh Pirates’ third baseman Kang Jung-ho enjoyed a two-homer night and matched his rookie season record and then some as he cranked out his 15th and 16th home run of the year. One of Kang’s solo jacks of the day came against his fellow Korean, Oh Seung-hwan, the closing pitcher for the St. Louis Cardinals. But while momentarily it seemed Kang was the winner of the two in their matchup, at the end of the day, it was Oh who came out smiling as he locked down his 16th save of the season with the Cards taking down the Pirates 9-7.

Playing at home at the PNC Park in Pittsburgh on Tuesday, Kang’s first solo jack came at the bottom of the fourth inning when he belted an 82-mile-per-hour changeup by Pirates starter Luke Weaver. The righty had kept the Pirates’ run to one throughout the first three innings while grabbing five strikeouts. After Kang, Weaver kept a steady pace on the mound and didn’t toss out anymore runs before he was relieved by Matt Bowman.

Kang added another hit for the Pirates and tallied an additional run batted in (RBI) when he singled a ground ball to center field at the bottom of the fifth. The Pirates narrowed the gap after the play, trailing only by one run at 4-5.

Two plays later, in the fifth, Kang drove home to score a go-ahead run when Jordy Mercer ripped a double for the Pirates. The Pirates took the first, and the last, lead of the game at 5-6 after Kang’s run.

Kang’s second solo homer of the game, and the 16th of the season, came at the bottom of ninth after the Cards took back the lead earlier in the inning. The Cards made an improbable comeback by piling in three homers at the top of ninth alone to make the score 9-6 and cement the win.

Going against his compatriot, Kang smacked Oh’s fourth pitch at the 0-2 count. The ball went over the center fence and while Kang rounded the base, Oh stood on the mound looking dumbfounded. It had been Oh’s fourth home run conceded this season.

This was the third matchup between Kang and Oh in the Major League. Against Oh, Kang went 4-for-13, batting .308 with one home run and three RBIs while the two played in Korea. But during the first two matchups this year, Kang flied out every time and had no notable hits to speak of.

After going 3-for-5 with two homers, Kang topped his home run record set during the rookie season last year. While it took Kang 126 games to tally 15 homers, he reached that number much faster this season, drilling his 15th and 16th homers by his 79th game. His home run is the first one in 21 days since August 16. Kang had been on the team’s disabled list after injuring his shoulder and returned to the big league after a brief rehab stint just a few days ago.

Kang and the Pirates left the dugout with their heads hung low as the team fell into an eight-game skid after the loss. On the other side of the ground, however, Oh and the Cards were jubilant. Oh had just carded his 16th save of the season after striking out two batters in the ninth while grounding out one. As a rookie, Oh is leading the Cards as its frame thrower since late June.