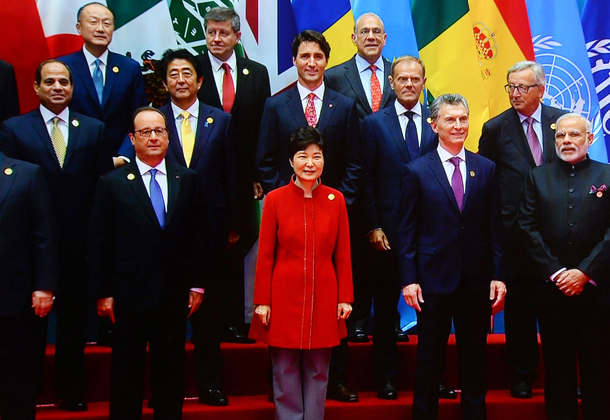 President Park Geun-hye poses with other heads of state at the G-20 Summit in Hangzhou, China, on Sept. 4. [JOONGANG PHOTO]

The Group of 20 meeting last weekend received only light coverage from the press and market analysts. Imagine my surprise when I read the content-heavy 48-paragraph statement issued at the conclusion of the gathering by country leaders. Either few took the trouble to read the communique or, more likely, its contents were dismissed as wishful thinking that wouldn’t be implemented any time soon.

Although it contains the obligatory reassuring words from global economic leaders, the communique makes clear that they are not satisfied with the recent pace of growth and the prospects for the future. They neatly identify the principles that would underpin better global economic performance, such as inclusiveness, integration, openness and a proper vision for growth. And they acknowledge the need to make globalization work better, and for a lot more people.

Cross-border partnerships and improved global policy coordination are rightly emphasized as critical to enhancing the world’s growth potential. They also correctly devote attention to institutional and governance issues. Indeed, unlike many such messages in the past, this communique goes into unusual detail about the measures that would be required for a more prosperous and inclusive global economy.

The communique gives the impression that world leaders recognize that they could be losing the battle against forces that would undermine longstanding drivers of growth and prosperity, including trade and investment openness. You also sense that the leaders representing countries that account for more than three-quarters of global gross domestic product are in broad agreement about how to restore growth.

Yet none of this has attracted broad attention, probably for a good reason. Very few believe that the G-20 — or any other global meeting — can influence national agendas in a deterministic way.

Most advanced economies are dealing with anti-establishment movements that disrupt traditional political arrangements and make it harder to reach agreement on economic governance issues. In the U.S., Congress is returning from its summer recess, but is too polarized to take the necessary economic decisions. In Germany, the ruling party of Chancellor Angela Merkel was dealt a humiliating loss in an election over the weekend. Spain has yet to form a durable new government. Italy is preparing for a tricky referendum that could determine the survival of Prime Minister Matteo Renzi’s government. The consequences of the Brexit vote in the U.K. have yet to take shape.

Frustrated by years of low growth whose meager benefits have accrued primarily to the best-off segments of society, anti-establishment movements are capitalizing on the vocal anger and dissatisfaction of the electorate. How better to fuel this anger then to also blame other countries and immigrants? The resulting dynamics add to the polarization of domestic politics, making any policy decision that much harder to reach and implement. Watching this paralysis, very few emerging economies have the willingness and ability to move forward on their own. Many of the mentioned policy steps require coordinated action.

Muted expectations about progress are amplified by concerns about the functioning of the G-20 itself. With the exception of a highly successful April 2009 London meeting that played an important role in helping to avert a costly global depression, most of the previous meetings were heavier on photo opportunities than on policy.

We should take comfort that the leaders of the global economy have signaled a good understanding of what’s holding back prosperity, and how to improve prospects for many and not just for some. However, in the absence of crisis conditions that focus minds and secure the cooperation of national politicians, such recognition will likely remain just words on a communique.