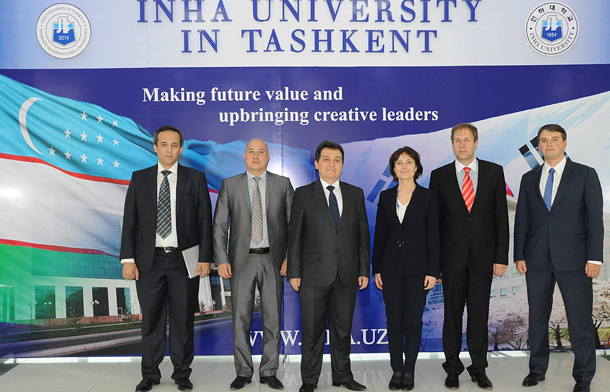 This year, more than 100,000 foreign students are enrolled in universities in Korea, bringing in an annual income of 800 billion won ($732.3 million). The Ministry of Education takes pride in the effects of “Study Korea.” But 210,000 Korean students studying abroad are spending an astronomical amount of money. The country’s deficit from our students overseas is 4.8 trillion won annually.

OECD member countries have an average of 8 percent foreign students to the total number of students, but in Korea, only 2 percent are foreigners. While developed countries focus on high added value in education, Korean schools haven’t sought change.

Steve Jobs said, “Innovation distinguishes between a leader and a follower.” The Ministry of Education’s proposal to attract 200,000 foreign students lacks innovation. By 2023, when the number of high school graduates would be 160,000 less than the capacity in universities and colleges, it wants foreign students to fill empty seats. This plan was submitted to the president, but it lacks substance.

Korea’s higher education institutions are on par with those at developed nations on the surface. There are 432 four-year universities and two-year colleges, online universities and graduate schools. But how many of them are attractive enough to attract students from developed countries?

In most surveys, only three schools — Seoul National University, KAIST and Postech — are ranked within the top 100 schools in the world, and KAIST and Postech often don’t make the list. Most of the 100,000 foreign students are from Asian countries — mostly China and Vietnam — and in many cases, they leave the school to make money in Korea rather than pursuing further education.

To expand the bases for foreign students and improve the quality of education, the language problem should be resolved, and culture, curriculum and living environment should be attractive. That takes a great deal of time and money. When barely a third of the current 100,000 foreign students can keep up with the lectures, it would be extremely challenging to increase the foreign student population to 200,000.

Since the policy is likely to be ineffective, we may want to find other solutions from abroad. I saw a possibility and potential blue ocean in Uzbekistan in Central Asia. Last month, I visited Inha University in the capital of Tashkent and saw a growing Korean wave in education.

IUT is a university specializing in information technology established by the Uzbek government in October 2014, and it is not a branch of Inha University. However, it is the first Korean higher education system to be exported, with Uzbekistan paying all expenses and Inha University providing curriculum and lectures.

The annual tuition is $5,000, four times more expensive than local universities, but admission is very competitive. Only those with top English grades are qualified to apply, and this year, 1,400 applied for 330 seats. According to university rector Sherzod Shermatov, students are attracted to IUT because they can get a Korean curriculum without going to Korea.

The situation in Central Asia is the opposite of Korea’s drastic shrinking student population. In Uzbekistan, 660,000 students graduate from high school while colleges and universities have a total of 56,900 seats. It is similar to Korea’s higher education demand in the past. Nearby Kazakhstan is similar. Shermatov says that Central Asians are interested in the Korean education that made the ‘Miracle on the Han’ possible, so Korea must not miss the blue ocean. Korean schools need to seek a breakthrough in Central or Southeast Asia.

What matters the most is schools’ willingness to expand. But even KAIST, named the most innovative science school in Asia, is passive in expanding abroad. Why are they so reluctant? I believe that they are clinging to the established interests. Foreign professors who have come to Seoul National University have left one after another due to unsatisfactory research environments and treatment. Korean professors also do not want to leave their comfortable seats and start a new challenge in another country. With the student population rapidly shrinking, however, staying put would mean an end for all.

The government also needs to wake up and face reality. The regulations on diplomas, academic administration and funding management hindering overseas expansion need to be removed.

Some joke that Korean women’s golf is the world’s best because the ministry of education does not oversee the sport. If the ministry wants to start a ‘Study Korea’ boom, the system has to be improved. Without innovative thinking, Korea can never take the blue ocean of higher education.