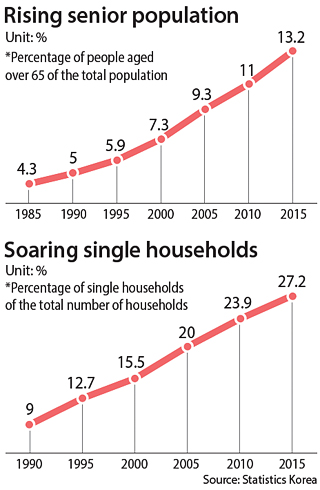 Korea’s population is still rising, but it is aging rapidly and single households are growing at an alarming rate.

Those are some of the results of a census by Statistics Korea carried out last year.

Korea’s population surpassed 40 million in 1985, and it took 30 years to top 50 million. People living in the Seoul metropolitan area - Seoul, Incheon and Gyeonggi - accounted for 49.5 percent of the total population last year.

Koreans aged 65 years old or older totaled 6.57 million, 13.2 percent of the population as of last year. That is a 2.2 percentage points increase compared to data from five years ago.

“The number of young Koreans under 14 years old dropped 13.9 percent, to 6.91 million,” said Ha Bong-chae, a director at the Statistics Korea, “while those aged over 65 rose significantly. The data showed that Korean society is aging rapidly due to the low fertility rate and people living longer.”

A society is considered to be “super-aged” when 20 percent of its population are 65 years or older. Some regions have already reached that status such as South Jeolla, where 21.1 percent of residents are senior citizens.

Even higher were the rates in Goheung, South Jeolla - 38.5 percent - and Uiseong, North Gyeongsang, which was 37.5 percent. The lowest senior citizen rate was in Ulsan’s heavily industrialized Buk District, at 6.4 percent.

People living alone have now become the biggest segment of households in Korea, according to the study.

Single-member households now account for 27.2 percent. This is an increase from 23.9 percent in 2010 and almost double the 15 percent recorded in 2000.

Household with four members accounted for 18.8 percent of the total, while two-person households accounted for 26.1 percent. This indicates that many married couples aren’t having children, particularly couples who both work.

“The number of single households or those with two members increased in Korea due to the low birth rate and as more people live away from their family because of jobs and school,” said Ha.

The census also showed that Korea’s homogenous population is getting more diverse.

“The 2010 data included non-married couples so it is not possible to compare how the number of multi-ethnic families rose last year, but we believe it rose significantly from the past,” said an official at the statistics agency.

The number of foreigners was 1.36 million, accounting for 2.7 percent of the population. The figure rose 41.6 percent compared to 960,000 in 2010. Nearly 63 percent of foreigners lived in the Seoul metropolitan area.

By nationality, Chinese, including Korean Chinese and Taiwanese, accounted for 51.6 percent of the foreigners.

Meanwhile, one out of five Koreans’ family name was Kim. Lee was second, followed by Park, Choi and Chung. The ranking for last names didn’t change from 2000.