Introducing the world to Korea

Introducing the world to Korea 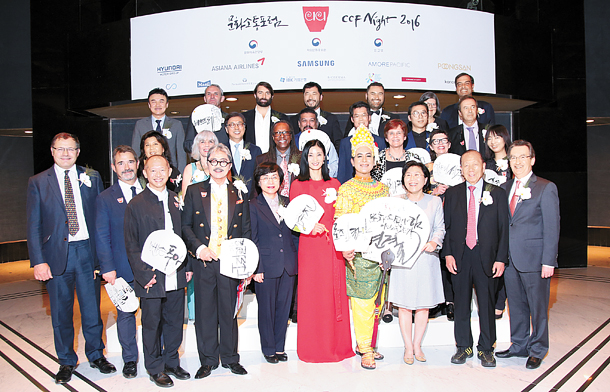 While 20 world leaders got together in China for the G-20 summit to discuss world affairs and the global economy, 20 cultural leaders from 20 different countries gathered in Seoul on Tuesday morning to ponder upon how to best promote Korean culture overseas in the digitized 21st century.

“As the chief digital officer of the Canadian Film Centre, I’ve spent my entire life living in cyber space,” said Ana Serrano, a delegate from Canada, adding that she had acquired some knowledge about Korea and its culture through online media before her arrival.

“But after experiencing Korea with all my five senses for the past couple of days, I’ve realized that technology is still so far behind. No matter how developed virtual reality technology is at the moment, it still hasn’t involved all five senses and it can’t provide true empathy for other cultures.”

The 20 leaders are invitees of this year’s annual Culture Communication Forum, which kicked off on Sunday. The event, which is organized by the Corea Image Communication Institute (CICI), a nonprofit that promotes Korean culture overseas, marks its seventh year this year.

The cultural leaders for this year include Katrina Sedgwick, director and CEO of the Australian Centre for the Moving Image; Sheng Qi, a Chinese painter and producer of cultural anthropology documentaries; Pierre Sang Boyer, a Korean-born chef from France, Harald Meller, director of the State Museum of Prehistory in Halle, Germany; Paul Bassett, a world champion barista from Australia, known in Korea for the cafe chain that bares his name; Beth McKillop, a research fellow of the Victoria and Albert Museum from the U.K.; and Tim Strong, a jazz and blues singer from the U.S., among others.

They toured around Seoul and experienced both traditional and contemporary Korean culture hands-on, ranging from touring the Secret Garden of the Changdeok Palace and watching gugak (Korean traditional music) and Korean traditional dance performances to visiting the National Museum of Modern and Contemporary Art as well as the Hyundai Card Design Lab and its Card Factory. They were also able to please their taste buds by enjoying Korean cuisine at high end restaurants like Congdu and Bicena.

Like Serrano from Canada, all delegates during the discussion session held on Tuesday morning at the Grand Hyatt Hotel in central Seoul, expressed the opinion that most people across the globe know about Korea in their own way, but are curious to know more, adding that the key is to focus on stimulating that curiosity using digital media.

McKillop from the U.K said she did her own research before coming to Seoul by asking the members of her family what they know about and what comes to mind when they think about Korea.

“I have a large extended family, starting from age seven to 91,” she said. “And the answers were interesting. It ranged from ‘Why are Koreans so keen on plastic surgery,’ and ‘Why are there so many great women golfers in Korea’ to ‘I know Gangnam Style’ and that ‘Korea’s advertising firms are so great that they are about 20 years ahead of us.’”

“Everybody, outside of Korea, at least those in Europe, seems to have a strong feeling about Korea,” said McKillop. “So I think human curiosity is behind communication.”

Benson Phua, CEO of Esplanade, which is Singapore’s national performing arts center, also said that he was surprised to find out the Korean food he’s tasted in Singapore and the food he had here are so different.

“You shouldn’t worry about how to promote Korean culture. Young Singaporeans are singing K-pop, your chicken is conquering Singapore and your television programs are keeping Singaporeans at home,” said Phua. “The important thing is making them come here and experience the real thing.”