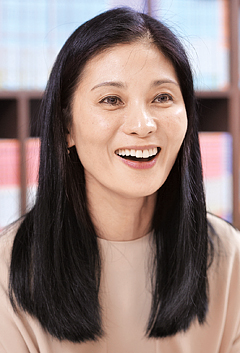 Kang Sue-jin has held many titles - principal dancer at Germany’s Stuttgart Ballet and artistic director of the Korean National Ballet, among others. She took off one of her many hats recently, ending her 30-year career as a dancer.

But as soon as she dropped one hat, she picked up a new one and became the Korean delegate of this year’s Culture Communication Forum (CCF) organized by the Corea Image Communication Institute (CICI). The non-profit organization organizes the annual event, which invites about 15 to 20 cultural leaders from around the world and allows them to experience diverse elements of Korean culture, share their thoughts on their experience and hopes that their positive experience inspires them to go back to their countries and become ambassadors of Korea. The event is in its 7th year.

Kang left her motherland in 1981 to study ballet in Monaco. Back then, she says Korea was nothing like today.

“No one knew where Korea was or what it was,” she said. “So when Korea held the Seoul Olympic Games in 1988, I was really happy because people began to recognize the country. Korea saw dramatic development economically and now culturally.”

Spending more than 30 years outside Korea and travelling across the world as a Korean ballerina, Kang says that “foreigners think more highly of Korea than most Koreans do.”

To hear more of Kang’s thoughts on the event and how to share Korean culture abroad, the Korea JoongAng Daily sat down with her for an interview after the CCF Discussion session on Tuesday at the Grand Hyatt Hotel in central Seoul. Here are some edited excerpts.

Q. Although you’ve traveled around the world for the past 30 years and met a lot of people, this must have been your first time to encounter a group of foreigners from such diverse cultural backgrounds. How was listening to their impressions of Korea?

A. It was a really interesting and exciting experience for me as well. All of them gave unstinted praise about Korea, not only about how advanced Korea’s IT is but about our culture. That’s what makes me so proud as a Korean. But one thing that saddens me is that not many Koreans listen to such praise or compliments from foreigners as they are. Most of them are complimenting with no strings attached, with a pure heart. But many Koreans I know, they take it negatively, thinking that foreigners are just saying that.

I think that’s our weakness - being so critical and cynical sometimes. I think it’s perhaps because we went through so much hardship and we don’t know how much we’ve achieved from the inside. But when you look at it from outside, like I did, you can really feel it. Like I said earlier, before the Seoul Olympics in 1988, nobody knew where or what Korea was so it was difficult for me to say that I’m Korean. But after the Games, it became somewhat easier. So what Korea needs now is a pat on the back and to become proud of what they’ve achieved, rather than being blinded by competition.

During the CCF discussion, there was much talk about whether technology development acts as a hindrance to people enjoying arts and culture. What’s your opinion?

Well, what we need is a balance. We can’t live without it so we might as well take advantage and make good use of it. But at the same time, we must make sure we maintain what is humane. Korea marked itself vividly on the world map with Psy’s “Gangnam Style.” That was possible because of YouTube. The more rapidly these technologies develop, we must make an effort to sustain arts and culture because without them, we will be living in a robotic world.

There are criticisms from some locals about this event that the foreigners who come are only experiencing a part of Korea and that discussion sessions end with no solutions, despite the money spent on it. What’s your opinion?

I did hear many criticisms. But discussions shouldn’t require an answer. We discuss to hear each other’s opinions and learn from each other. It may result in a solution but it doesn’t have to. Moreover, it doesn’t require a person to visit every corner of a country to form a positive image of the country. I’ve been traveling nearly all my life and I didn’t have to experience all their cultures or visit all of their cities to build an image of a country. Many of these delegates, who are cultural leaders, said they want to come back to Korea for their holidays with their family. They say they never thought about coming here, but by coming here, they knew they want to return. So I believe this is still a great way to promote Korea and you can never disregard the power of word of mouth.