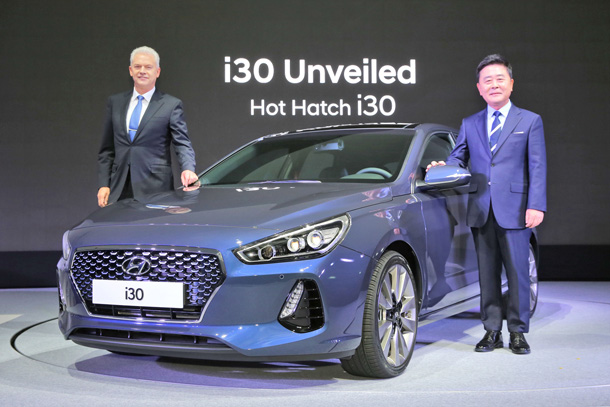 Albert Biermann, executive vice president of Hyundai Motor’s performance and high performance Vehicle Development Division, left, and Kwak Jin, executive vice president of the company’s sales division, stand next to the third-generation model of the i30 hatchback at a launch in Seoul on Wednesday. The automaker is targeting the “hot hatch” to a younger generation of drivers. [HYUNDAI MOTOR]

Hyundai Motor unveiled its new i30 hatchback on Wednesday at Some Gavit, a floating island on the Han River in central Seoul. The third-generation model comes five years after its predecessor’s release in 2011.

Hatchbacks haven’t been exceedingly popular in the nation, but Hyundai will target younger generation drivers in an effort to create new demand. The model has been more popular in European markets where the practical features of hatchbacks, like increased trunk capacity by connecting trunk space with back seats, are more appreciated.

The automaker upgraded the engines, design, safety and smart features on the “hot hatch” while offering them at a price determined to grow the overall market share for hatchbacks in the local market.

In terms of design, the new model lowered the roof by 15 millimeters while adding 25 millimeters to the hood length to give the car a sleeker appearance. It also comes with a “cascading grille,” a new signature design Hyundai added. “Many global carmakers these days are highlighting their grille styling and we also developed our grille to add our own brand identity,” said Ha Hak-soo, director of interior design at Hyundai Motor. The cascading grille is modeled off of metallic stain from Hyundai’s smelting furnace, according to the company.

“Our auto market is slowing and we think dividing the market into smaller segments has become more important to cater to diverse customers’ demands,” said Kwak Jin, executive vice president of the domestic sales division. “The domestic hatchback market has grown from 4,000 car sales 10 years ago to roughly 29,000 cars last year and I think the role of the new i30 is very important.”