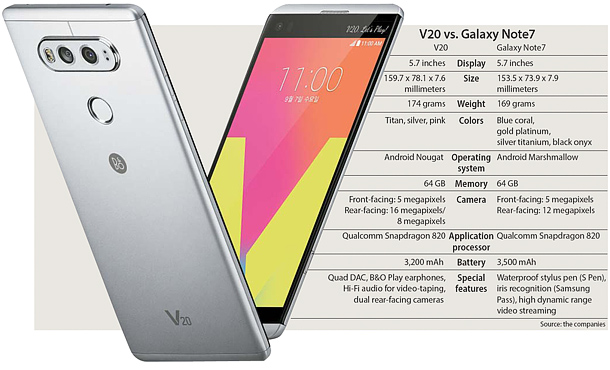 LG Electronics unveiled its V20 smartphone, packed with professional-grade audio and video features to appeal to tech junkies, during simultaneous events held on Wednesday in Seoul and San Francisco.

The V20 is the second product in LG’s V line of high-end smartphones, a follow-up to the V10 unveiled last October.

“We have upgraded the quality level of the audio and video features that were highly appreciated in the V10,” Cho Jun-ho, president of LG’s mobile communications unit, said at the unveiling event in Seocho District, southern Seoul. “We hope to provide the best multimedia experience for customers and come up with a brand-new standard in premium phones, imbued with our own value.”

The V20 comes as domestic rival Samsung Electronics is forced to recall up to 2.5 million units of its flagship Galaxy Note7 phablet after reports of the device’s battery overheating and melting. The unveiling also took place a day before Apple was expected to take the wraps off its iPhone 7, which has reportedly ditched the headphone jack in favor of “Bluetooth-like” technology, according to one report from KGI Securities.

When asked whether Samsung’s recent mishap could be a renewed opportunity for LG, Cho said he was “not sure,” adding that customers’ response to the new LG phone would be most important.

LG, the world’s sixth-largest smartphone producer as of the first quarter this year, has been struggling with mobile devices. Its mobile communications unit, responsible for smartphones, posted operating losses for five consecutive quarters through the April-July period this year.

The V20 boasts several pioneering features, including being the first smartphone in the world to be shipped with Android’s latest Nougat operating system.

It is also the first to be equipped with four digital-to-analog converters for audio playback, whereas most smartphones only carry one. The converter reduces background noise and produces audio quality that is as close to the original sound as possible. With four converters, the company says it has reduced noise on the V20 by up to 50 percent compared to other smartphones.

LG’s new device can play higher-resolution digital audio files at a sample rate of 384 kilohertz at 32 bits, 16 times better than CD’s 44.1 kilohertz at 16 bits. The higher the number, the closer the audio file is to the original sound.

The smartphone maker partnered with Bang & Olufsen (B&O), a high-end Danish consumer electronics producer, to work on enhancing the phone’s audio quality. The V20 will come with B&O Play earphones at no extra charge.

In addition to higher-quality playback, the company says the V20 can record sound at a wider range of decibels - up to 132 decibels, equivalent to the sound of a jet taking off.

“We took into consideration the fun of recording sound as we developed the V20,” Cho said. “With it, you can record studio-quality sound.”

The V20’s predecessor already came with features considered professional-level such as gyro sensor-based image stabilization, and LG has built on that aspect by adding high-fidelity audio recording to the latest device.

The phone has two rear-facing cameras - 8 megapixels and 16 megapixels - with the former able to capture an angle as wide as 135 degrees, even wider than human vision. Its 5 megapixel front-facing camera can take a group selfie containing as many as eight people with its 120-degree angle of vision.

The company will start shipping out the V20 later this month in Korea through the country’s three mobile carriers. Consumers in the United States, Hong Kong and Taiwan will be able to receive the phone later.

China has been left out as a key market.

“We will concentrate on Hong Kong and Taiwan for the time being,” Cho said. “But sales in China will be through online only. We will be there, but a large-scale success is deemed difficult at this moment.”

In China, the world’s largest smartphone market, the relatively obscure domestic producer Oppo has claimed the top spot in market share at 22.9 percent as of June, the latest data available from market researcher Counterpoint Technology. Oppo outpaced the previous powerhouse Huawei by 5.5 percentage points. Apple ranked fourth, and Samsung and Xiaomi both tied for fifth.

Asked if LG had any plans to introduce a mobile payment system like that of Samsung and Apple, Kim Hong-joo, head of product planning at the mobile communications unit, said the company is “in the middle of discussions.”

“Simply launching it is not that important,” he said. “What kind of value we can deliver to consumers is more crucial.”

Kim added that he expects connecting and controlling home devices with smartphone apps, better known as the Internet of Things, will become more commonplace in the next year and that LG is “gradually building the ecosystem for the service.”