Kang continues to light a trail of glory for Pirates

Kang continues to light a trail of glory for Pirates 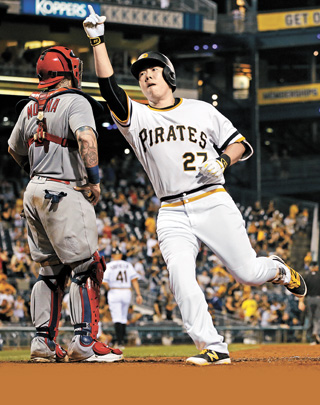 Kang Jung-ho of the Pittsburgh Pirates celebrates his solo home run on Wednesday against St. Louis Cardinals after rounding the base. Kang’s go-ahead homer lifted the Pirates over the Cards 4-3. [AP/NEWSIS]

Kang Jung-ho of the Pittsburgh Pirates belted another homer on Wednesday, the second straight day the Korean third baseman sent one over the fence against the St. Louis Cardinals. Kang’s 17th homer of the season was the go-ahead solo jack that ended the eight-game skid of the Bucs.

At PNC Park in Pittsburgh on Wednesday, Kang went 3-for-4, crushing a home run at his last at-bat at the bottom of the eighth. The Cards’ flame thrower Alex Reyes tossed a 99-mile-per-hour fastball, but at the 1-2 count, Kang smashed the pitch and went deep beyond the center fence.

The game was tied at 3-3 before Kang went to the plate but he cemented the win to lift the Pirates over the Cardinals with his solo shot.

Kang had already tallied a run batted in (RBI) earlier in the game when he hit a single at the bottom of the first inning to bring home David Freese. Kang’s RBI gave the Pirates an early lead at 2-1 and his batting average saw an increase from .249 to .257.

The Korean Pirate enjoyed a multi-homer game the night before, including the long ball against another Cards closer, Kang’s compatriot Oh Seung-hwan. But Oh was absent from the game on Wednesday.

The Pirates have been struggling, stuck in a slide for the past couple of weeks. But all the Pirates needed to end its struggle, it turns out, was the hefty swing of Kang’s bat to spark the team’s offense. Kang had just been activated from the team’s disabled list after suffering a shoulder injury in August. Kang also suffered a season-ending knee injury last year and had missed the first month of this year’s season.

“His legs are fresh, the base is strong. He’s absolutely charged,” Pirates manager Clint Hurdle said of Kang, according to MLB.com. “Jung-ho has the ability to do some very special things. We’ve seen it before.”

Kang is already well beyond the home run record that he set last year as a rookie. While Kang tallied 15 home runs in 126 games last year, he is moving at a much quicker pace this year, cranking out 17 dingers already in just 80 games. At the moment, Kang is the most successful Korean slugger in the Major League, a regular in the lineup and one of the irrefutable stars leading the Pirates.

Elsewhere in Major League Baseball, Choi Ji-man of the Los Angeles Angels has returned to the big leagues again, and during his first game back, he went hitless and stepped down from the plate without a notable play to speak of.

He had come in as a pinch-hitter for the Angels in the eighth inning but struck out swinging, going 0-for-1 for the day. Against the Oakland Athletics, the Angels suffered a 4-1 loss.

Choi was included in the Angels’ opening day roster in April but was opted to the minors. He went back and forth between the majors and minors and finally came back up for the third time earlier this month.