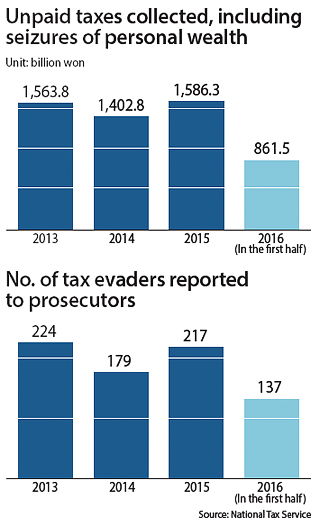 A loan shark lived in a luxury apartment bought in his wife’s name. He reported little of his income and paid very little in tax. The tax agency did a raid. Agents found 22 million won ($20,000) in cash and checks - and bonds worth 1 billion won hidden under a bucket in the toilet and inside the washing machine.

The owner of a motel in Gangnam, southern Seoul, sold the property and failed to pay taxes on the profit. His business partner did, which tipped off the tax agency. Agents visited the scofflaw in a nursing home. They found 400 million won in checks in an eye-glass case.

These were two of the tax evasion cases the nation’s tax agency uncovered in the first half of the year.

The National Tax Service (NTS) Thursday said it managed to collect 861.5 billion won in taxes after tracking down tax evaders in the first half of this year. This is a 21.3 percent increase compared to the 151.1 billion won that the NTS tracked down a year ago.

The NTS said it collected 414 billion won in cash and another 447.5 billion won by seizing assets.

The agency filed civil suits in 155 cases and reported 137 tax evaders to the prosecutors’ office for possible criminal charges.

The NTS said its success was based on an analysis system adopted in July 2015 in which its agents have been able to spot the hidden wealth of tax evaders by looking into a person’s income and spending.

The government has been stepping up its tracking of tax evaders at home and abroad and plans to increase its investigations.

“We will track down [unpaid taxes] with tenacity whether it is through field investigation or through civil suits, especially on people who hid their wealth through smart schemes,” said Kim Hyun-joon, a tax agency official. However, the agency said it will be lenient with people working in industries that are undergoing corporate restructuring such as shipbuilding and shipping.