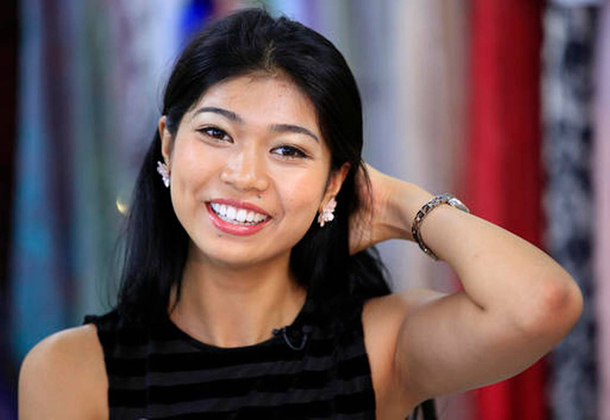 TOKYO - The newly crowned Miss World Japan is hardly a typical Japanese woman. Being half-Indian is only part of it.

Priyanka Yoshikawa, crowned Monday after outshining more than 6,900 other applicants, has a certificate in elephant training, teaches English to children, enjoys kickboxing and volunteers as a translator at medical meetings.

The 22-year-old is preparing for the worldwide pageant in Washington, D.C., in November.

Being fitted for a couture gown for the event is part of the program, but fashion plays a small role in Yoshikawa’s life.

And she doesn’t want to fit into any stereotype.

She told The Associated Press on Wednesday that being in a beauty contest is a way to achieve her ambitions: go to Bollywood, while pursuing her goal of building a children’s home in India.

A national debate was sparked in largely homogeneous Japan last year when Ariana Miyamoto, a half-American of African descent, was chosen Miss Universe Japan, another international beauty contest. Miyamoto faced criticism that she doesn’t look Japanese enough, even though she mostly grew up in Japan and speaks the language perfectly.

So far, Yoshikawa has faced less criticism. She says her victory is perhaps a sign that Japan is becoming more tolerant of diversity.

“I think (being mixed race) is getting more acceptable,” she said, citing her victory as the second in a row. It’s a matter of “who can represent your country (best) and I think that’s the answer,” she said after a fitting at a Tokyo dressmaker’s office and discussing the design of her gown for the November event.

She did think about her identity at length, but being called “hafu,” or half, a term in Japanese for people of mixed-race, doesn’t bother her, though it sometimes has negative connotations. Her roots have expanded her cultural experiences and perspective, she said.

While traveling in Asia, she is often mistaken as a local, while in Japan she is constantly scrutinized, Yoshikawa said. Japanese people seem to have stereotypes of how Japanese, Asians, or Americans should look. “I just let it go… you can be anything now. We are all the same human beings.”

Yoshikawa, who has an Indian father and a Japanese mother, grew up mostly in Japan but spent one year in India and three years in America. She says living overseas gave her a broader perspective, but that she still calls Japan home.

What struck her the most was a year in Kolkata. As a 9-year-old girl, she saw her peers living in poverty, up close.

“That totally changed my life. If I didn’t live in India, or India was not inside me or part of me, I don’t think I would have been here talking as Miss World Japan,” she said. “Living in India has changed everything, how I see the world, how I want to live, my vision.”

After returning to Japan with her family, cleanliness and safety there struck her again. She says the stark difference inspired her to work for a change - to improve the lives of children in India.

To help send her message out, Yoshikawa hopes the elephant training license on her resume will catch attention because, she says, there will be more mixed-race people in Japan and that will no longer be a way to stand out.

The license, which she obtained in Laos, is not just a decoration. She loves elephants, in part because of her Indian roots, and can ride an elephant with a passenger on the back and can bathe them.

Beyond Miss World, she wants to achieve her ambitions in India - in Bollywood’s film industry and Kolkata.

“I would like to go into that industry. I need to learn dancing and Hindi but yes, of course I love to try anything,” she said. AP