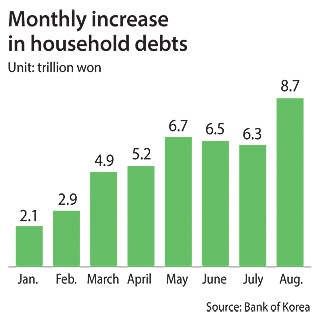 The latest figure is the highest August increase since the Bank of Korea began keeping records in 2008.

The monthly increase, announced Thursday, is a letdown to the government since President Park Geun-hye’s administration announced a series of policies last month aimed at reigning in debt. The Finance Ministry said last month that it will tighten requirements for group loans for property redevelopments and asked the state-run Korea Land & Housing Corporation to reduce the supply of apartment units on the market.

Compared to the previous month, the August rate jumped 27.5 percent and was up 25.2 percent over June.

The main culprit behind the increase was overdraft loans. Overdrafts refer to loan arrangements in which a bank extends credit up to a maximum amount against which a current bank customer can write checks or make withdrawals. These type of loans tend to come with higher interest rates and are common among people who need money quickly.

Song In-ho, a researcher at the Korea Development Institute, proposed to impose stricter lending screening for credit loans. He noted that controlling lending by non-banking institutions is important, since a large amount of household debt stems from that segment.