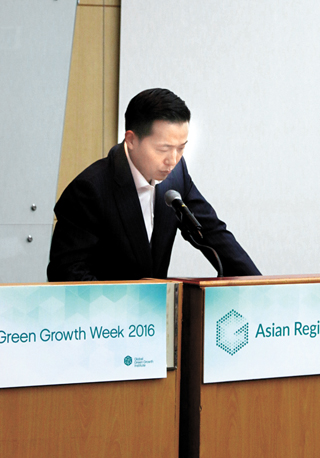 The event was hosted by the Global Green Growth Summit, Global Green Growth Institute, the World Bank, Organization for Economic Co-operation and Development and others. It is an annual conference held to discuss ways to promote green growth in the world. This year, it was held in Jeju from Monday through today.

“The combination of both solar technology and energy storage system technology has enabled a paradigm shift in the energy industry and it will ultimately lead to a fundamental transformation in our everyday lives,” Kim said in an address. “Just as there was the Industrial Revolution in the 18th century, this generation will become the first to see the energy revolution.”

“We expect 54 percent of power will be generated from new and renewable energy sources by 2040 and solar will account for about 26 percent of it,” Kim said. “Coupled with ESS technology, solar energy, with its inexhaustible source, will bring about a new paradigm shift.”

Some of the changes Kim foresaw include the emergence of energy “prosumers” who can generate energy via solar panels at home and sell it.

Hanwha Q Cells has made progress in solar technology development and recently set a new energy efficiency record of 19.5 percent in the poly-crystalline solar cell category with its module Q.Plus.