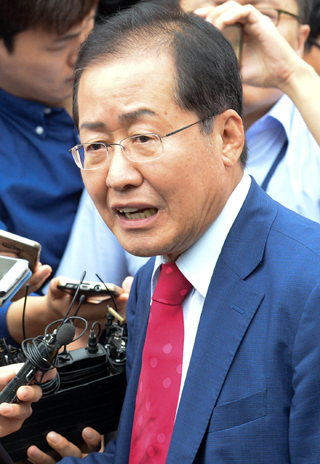 South Gyeongsang Governor Hong Joon-pyo was found guilty Thursday of taking money from the late businessman and politician Sung Wan-jong and sentenced to 18 months in prison, ending his presidential ambitions.

Hong, 62, stood trial on charges that he accepted 100 million won ($91,601) from the late Sung, former chairman of the Keangnam Enterprises, through Sung’s aide Yoon Seong-mo, former vice president of the Keangnam in his National Assembly office in June 2011. The money was delivered in a paper bag.

The Seoul Central District Court found Hong guilty partly based on Sung’s phone interview with a local newspaper just hours before his suicide on April 9, 2015, in which the businessman admitted that he had bribed Hong to curry his favor.

The interview “bears credibility,” said the presiding judge, and therefore was “qualified as evidence.

“The defendant has served many years as a lawmaker and chaired the governing party and is currently the governor of South Gyeongsang. His action therefore carries much significance and impact on the people,” said the judge, who also fined Hong 100 million won.

“Despite his high position, the defendant received a hefty illegal political donation of 100 million won from the businessman Sung, which seriously undermines the people’s trust in democracy and rule of law in this country.”

The judge said Hong’s aides had tried to persuade former Keangnam vice president Yoon to distort his testimony in favor of Hong and noted Yoon had rejected the demand and told the truth during trial.

On Thursday, Yoon received a six-month prison term suspended for a year.

“We took into account the fact that Yoon deeply regretted his action and contributed to laying bare the truth in this case,” said the judge.

The court did not immediately send the two-term governor to jail in consideration of his current title and years of public service as a prosecutor and a politician.

Hong can appeal his judgement without imprisonment, though he still faces the prospect of being locked-up if an appellate court also finds him guilty and orders immediate imprisonment.

Hong balked at his conviction, saying he could “never accept the ruling” and vowed to bring the case to a higher court.

“I feel like I just got mugged [by the court],” Hong told reporters after the ruling.

Trouble for the former ruling party chief began when a list of names of eight politicians was found in a pocket of Sung’s jacket after he hanged himself last April. Hong’s name had figure 100 million won written next to it, which prompted a prosecutorial investigation.

Hong was given the 100 million won from Sung in June 2011, when Hong ran for the chairmanship of the Grand National Party, the predecessor to the ruling Saenuri Party.

Hong was elected as chairman on July 4, 2011. He stepped down from the post on Dec. 9, 2011, to take responsibility for the party’s defeat in the Seoul mayoral by-election in October that year.

Hong has not shied away from publicizing his ambition to run for president next year by capitalizing on his reputation as a man who overcame a difficult childhood. Thursday’s conviction put an end to that ambition and possibly his political career.