Donga Bookstore has plenty of books, and personality

Donga Bookstore has plenty of books, and personality 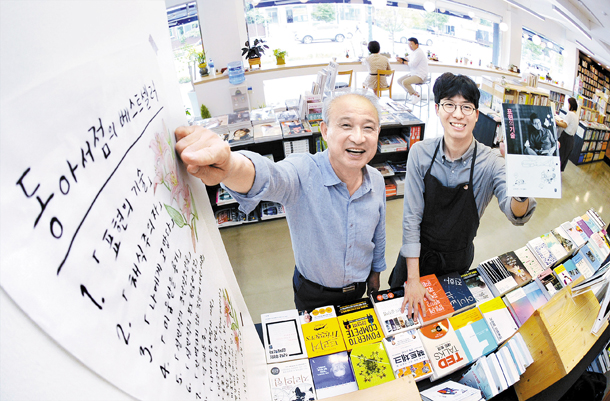 Kim Il-su, left, owner of Donga Bookstore, and his son Kim Young-geon, right, the manager, introduce the bookstore’s best-seller for July, “The Technique of Expression,” by Rhyu Si-min. [KIM SEONG-TAE]

Fewer and fewer people are walking into bookstores these days, particularly with the growing popularity of e-books.

As a result, the number of bookstores in the nation has dropped from 5,378 in 1996 to 1,559 last year, according to the Korea Federation of Bookstore Association. That means around 70 percent of the bookstores have disappeared over the last 20 years. But Donga Bookstore in Sokcho, Gangwon, is bucking the trend and has actually tripled its sales over the last year.

While larger businesses are able to attract customers with their expensive interiors - Kyobo Bookstore in Gwanghwamun, central Seoul, for instance, recently acquired two beautiful tables made from ancient kauri pine that are each large enough to seat 50 people - smaller bookstores like Donga have to find less costly ways to draw people in.

Standing for 56 years until now, the bookstore has been operated by three generations of the same family.

JoongAng Ilbo reporters sat down with the 64-year-old owner of Donga Bookstore, Kim Il-su, and the 29-year-old Kim Young-geon, the manager and Il-su’s son. The store was originally opened by Kim Il-su’s father under the name Donga Stationeries and was then passed on to his son, Il-su, who changed its name to Donga Bookstore in 1978.

Back then, the store was 130 square meters (427 square feet), but last January it was expanded to three times that size and now features reading zones equipped with tables, comfortable sofas and enough chairs for nearly 50 people to sit and read on.

“When expanding the store, we focused the most on what usually comes to mind when one thinks of a bookstore,” said Kim Young-geon.

The key to the store’s strategic move was attracting customers by making them want to stay there longer, instead of having them skim through and buy books in less than 10 minutes.

Creating its own best-seller list and inviting authors to hold talks was another key strategy. Rhyu Si-min, former health minister and author of the bookstore’s recent best-seller, “The Technique of Expression,” was invited to speak on Aug. 16.

In addition, the store puts up special exhibitions when renowned authors pass away. When writer Oliver Sacks passed away in Aug. 2015, for example, the store arranged a “Sacks Corner,” featuring a collection of his books.

It did the same for Harper Lee, author of “To Kill a Mockingbird,” and Michel Tournier, who wrote “Friday and Robinson” and was often considered for the Nobel Prize in Literature.

The store also creates a friendly atmosphere by using fun names for different genres, such as “A Delicious Bowl of Books” for its section containing cookbooks or books about food in general and “The Story of My Lifetime Companion, Animals” for its section of books on animals.

The store flashes its sense of humor by placing certain books on display alongside each other in order to create sentences or conversations. One example includes a display of three books entitled “Why Does Love Hurt So Much?,” “Because We Don’t Know Ourselves” and “If That’s So, You Are Normal.”

As Kim Il-su reminisced about the old days of the early 1980s to 1990s, when boys formed long lines in the morning for a new release of “Slam Dunk” or “Dragon Ball,” which were popular comic books back then, he gave other bookstore owners some advice.

“Changing one’s sales method is the key to the survival of a bookstore,” he said. “Because books are not items that sell out fast, most bookstores sell them on consignment, in which the publishers bear the expenses for unsold books. But consignment sale contracts usually require bookstores to shelve more books than necessary. Even if we want to display 10 of their books, it is imperative that we shelve 30, taking up space where other kinds of books could have been shelved.”

In order to fill the shelves with as many kinds of wanted books as possible, Donga Bookstore returned 20,000 books last January and bought 50,000 new ones through a wholesale dealer. This wasn’t easy at first, since they had to pay for all the new books upon receiving them.

“It’s true that making full payments for the books before even selling them is a financial burden,” said Kim Il-su. “But by doing this, we will be able to fill the bookstore with all sorts of books that customers want.”