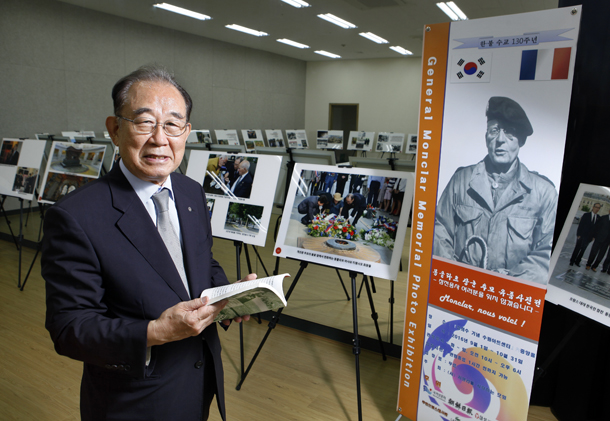 Kim Soung-soo poses for a photo at the General Monclar Memorial Photo Exhibition at the Soorim Arts Center in Dongdaemun District, central Seoul that he organized. The exhibition in commemoration of the former French general runs until Oct. 31. [PARK SANG-MOON]

A legendary French general who sacrificed his rank and risked his life for Korea, a country he knew almost nothing about, will be honored by a special photo exhibition.

The exhibit for the Korean War (1950-53) veteran is being held in northern Seoul by Kim Soung-soo, a 73-year-old lawyer.

Kim organized the General Monclar Memorial Photo Exhibition, to be held at the Soorim Arts Center in Dongdaemun District, central Seoul, in order to tell the brave story of the late French general.

Raul Charles Magrin-Vernerey, who later adopted the name Ralph Monclar, was a French solder with over 30 years of service in the armed forces.

Monclar was a three-star general when France decided to send a battalion of 800 men to South Korea as part of the UN allied forces, in order to thwart North Korea from taking over the country. His rank was too high to lead a battalion unit, as it would cause a disruption in the chain of command.

Then to the surprise of many, Monclar made a choice that struck a chord in Kim’s heart: he voluntarily reduced his rank to lieutenant colonel so that he could be sent to Korea to fight off communist forces.

Kim, a former judge, was first attracted to the story of Monclar, whom many Koreans still don’t know much about, roughly 10 years ago when he had an office in Jipyeong-ri area in Gyeonggi, where the French solder led his men in a fierce battle in the winter of 1951 to fend off Chinese troops. After hearing accounts of Monclar’s bravery, Kim has led a campaign since then to raise public awareness of the heroism and love this veteran soldier showed the Korean people.

“At the photo exhibition,” said Kim, who founded and runs the Foundation for the Remembrance of the Chipyong-ni Battle, “about 30 photos of General Monclar donated from the French military academy and his relatives, as well as goods used by him such as his military hats and epaulets, are on display.”

The Battle of Chipyong-ni is considered a key moment in the conflict. The UN forces were growing increasingly worried about the military capabilities of the Chinese, who had pushed the allied forces below the 38th parallel all the way from the border area with China. They had seized Seoul, and had the allied forces been defeated and let the Chinese move south of Jipyeong-ri, it was possible that the UN Command would have considered a military withdrawal from the peninsula, giving up on South Korea.

The Chinese withdrawal from Jipyeong-ri on Feb. 15, 1951, was their first defeat since entering the war four months earlier. With momentum from the victory, allied forces recaptured Seoul by mid-March and made a steady northward advancement.

“Through the special exhibition, I want to let people know the sacrifice the French general made for our country, one he hardly knew beforehand,” said the veteran lawyer, adding that the event was also meant to commemorate the 130th anniversary of the opening of diplomatic relations between Korea and France.

The exhibition is free of charge and is open from 10 a.m. to 6 p.m. every day except Mondays.