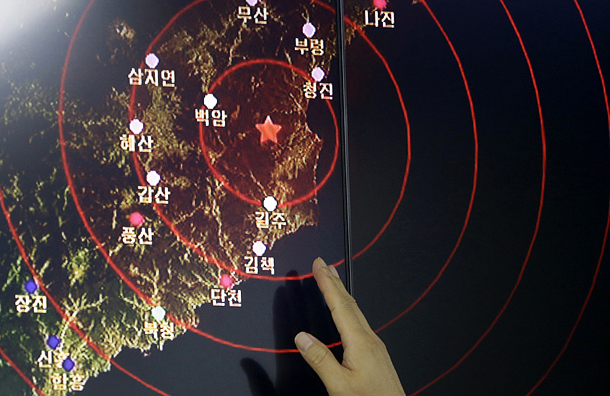 An official of the National Earthquake and Volcano Center of the Korea Meteorological Administration in Seoul points at the epicenter of seismic waves emanating from North Korea, Friday. North Korea announced Friday that it conducted its fifth nuclear test and claimed total success. [AP/NEWSIS]

North Korea carried out its fifth nuclear test Friday morning and boasted of a weapon light and small enough to be mounted atop a ballistic missile, a nightmare scenario for Washington, which has military bases in the Pacific and on its west coast within Pyongyang’s striking range.

The North’s fifth nuclear test was estimated to have been twice as powerful as a fourth test in January. Friday’s weapon was assessed to have a 10 kiloton yield, the total energy produced by the bomb, about four kilotons more than the January test. 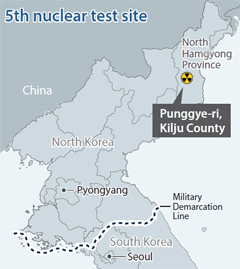 It was North Korea’s most powerful test ever.

Calling Friday’s test a “success,” the North said test results showed it can now produce a nuclear warhead small and light enough to be put it on top of a ballistic missile to target “hostile forces.”

“Through today’s nuclear test, we have confirmed the powerful impact of a standardized nuclear warhead which will be mounted on a strategic ballistic rocket prepared by the strategic Hwasong artillery unit of the North Korean army,” declared the North’s Nuclear Weapon Research Center in a statement released Friday.

The North went on to claim its nuclear capability “reached a point of standardization,” a possible threat of mass production of warheads.

Friday was the 68th anniversary of North Korea’s Foundation Day, which celebrates the founding of the nation.

The first sign of the North’s fifth nuclear test was the detection of a tremor with a magnitude of around 5.0 by seismic research centers around the globe.

A South Korean defense ministry official told reporters Friday the military detected an artificial tremor with a magnitude of 5.0 at 9:30 a.m. at the North’s Punggye-ri nuclear site in northeastern North Hamgyong Province, the site used for the North’s past four nuclear underground tests.

The official said given the magnitude, the Friday blast was likely to have produced around 10 kilotons in yield. The January test created a 4.8-magnitude artificial tremor.

“The magnitude of the earthquake this time was 5.04, the largest ever done by the North, including its January test with a 4.8 magnitude tremor,” said Kim Nam-wook, director of the earthquake and volcano department of the Korea Meteorological Administration (KMA).

Although the weapons tested have been getting stronger, the one blasted in January was actually weaker than its predecessor.

It is estimated that the January test produced 6 kilotons of yield, which was less than the 8-kiloton yield of the third nuclear test in 2013.

The North’s second nuclear test in 2009 had 2-kiloton yield, and the first in 2006 yielded less than 1 kiloton in total energy.

The yield of the Friday test could be slightly higher as estimates of the tremor’s magnitude differed among earthquake observation posts overseas.

Both the U.S. Geological Survey and the European Mediterranean Seismological Centre said they had detected a tremor with a magnitude of 5.3.

The nuclear bomb that was dropped on Hiroshima on Aug. 6, 1945 produced 15 kilotons of yield, and killed an estimated 130,000 people, though the exact death toll of mankind’s first nuclear attack will never be truly known.

One point that set the Friday test apart from the North’s four previous tests was the quickness with which it followed the previous test.

There were only 248 days between the fifth and fourth tests, breaking a three-year cycle that the North had maintained for its past four tests.

The intelligence agency in the South said that is an indicator of rapid advancement in the North’s nuclear technology, according to a lawmaker briefed by the agency Friday.

“With the shorter amount of time, the intelligence agency is concerned that the pace at which the North is advancing its nuclear program is faster than assessed by the Defense Ministry,” said Rep. Kim Byung-kee of the Minjoo Party after a briefing by the National Intelligence Service (NIS) to parliamentary defense and intelligence committee members.

Kim added that the NIS didn’t consider the Friday test to have been of a hydrogen device.

The North’s rush to test its nuclear capability also raised speculation that it had amassed enough nuclear material to be spent on successive tests and that it was ever more determined to advance its miniaturization technology to make a nuclear warhead small enough to be mounted on top of an inter-continental missile to target the U.S. mainland, namely Los Angeles, and U.S. military bases in the Pacific rim.

Yim Man-sung, professor of nuclear energy environment and security at KAIST told the JoongAng Ilbo that the fact that the North waited only eight months for its fifth test was a telling sign that it had “secured ample nuclear materials” to be used on experiments.

Yim added Pyongyang was getting to a point where it could mass-produce nuclear weapons.

“The reason Seoul and Washington are putting so much pressure on the North (to give up its nuclear program) is that if left untouched, it could take a leap to make as many as 100 nuclear weapons via mass production (in the future).”

It also appeared that Pyongyang has gained confidence from a series of successful medium-range missile launches lately, a feat that could have led North Korean leader Kim Jong-un to believe that his country has acquired enough technology to target the U.S.

On Monday, the North launched what appeared to be three Rodong-class missiles on mobile launching pads virtually simultaneously, all within a minute, all of which flew nearly 1,000 kilometers (621 miles) before falling into Japan’s maritime territory. The North also succeeded in a hard-to-detect submarine-launched ballistic missile test last month, which also fell into waters controlled by Japan.