Seoul vows to blast back if Pyongyang attacks

Seoul vows to blast back if Pyongyang attacks 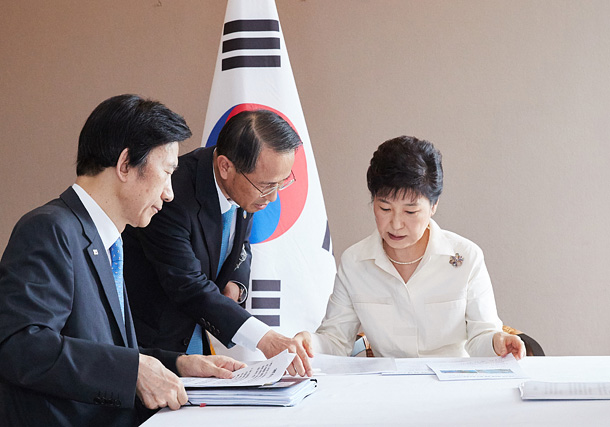 “If the North harms us with nuclear arms we will directly target, punish and retaliate against the North Korean leadership, including its war command,” said Lieutenant General Lim Ho-young, strategy and planning director of the Joint Chiefs of Staff. “We will operate our strike capabilities, including missiles that are capable of making precise strikes en masse simultaneously and will deploy our elite special operations forces.”

The retaliation will target the North’s command and control system, he said, as well as missile facilities and submarine bases using the South’s capabilities. He said the South has missile capabilities comparable to cruise and ballistic missiles of the North, while its air-to-ground guided bombs and missiles are superior to those of the North.

He claimed the South is capable of attacking a window-sized target in the North.

The warning of military retaliation came as the international community vowed to use all possible means to end North Korea’s nuclear brinkmanship following its fifth nuclear test, including the United States’ renewed promise of a nuclear umbrella over the South.

President Park Geun-hye and U.S. President Barack Obama discussed their coordinated efforts in a telephone conference shortly after the nuclear test was detected in the morning. “In order to protect the South from the North’s threats,” the Blue House said, “Obama vowed to take every action as part of a mutual defense treaty, including using its nuclear umbrella.”

They also agreed to use all possible means to force the North to give up its nuclear program, including a new, stronger resolution at the UN Security Council. The two leaders talked for 15 minutes from 10 a.m., the Blue House said. Park was in Laos when she talked to Obama, who was on Air Force One on his way to Washington from his Asia tour. Obama consulted with Park and Japanese Prime Minister Shinzo Abe in separate phone calls, the Associated Press reported, quoting White House press secretary Josh Earnest.

Obama reiterated the unbreakable U.S. commitment to the security of America’s allies in Asia and around the world, and promised that provocative actions from the North will be met with serious consequences.

Park also issued a pointed warning toward the North, particularly its leader. Calling the North’s fifth nuclear test “proof of the Kim regime’s maniacal recklessness,” Park said, “the provocation will only speed up the North’s path toward self-destruction.”

She added, “The only thing the Kim regime will earn through the nuclear test is more international sanctions and further isolation.”

Park made the comments in Laos on the final day of a diplomatic tour. Over the past week, she visited Russia, China and Laos and sought the international community’s support to end the North’s nuclear and missile programs through bilateral and multilateral summits with world leaders, including Russian President Vladimir Putin, Chinese President Xi Jinping, Obama and Abe. Following a summit with her Laotian counterpart, Bounnhang Vorachith, Park canceled other appointments in Laos and headed to Seoul. In Seoul, Prime Minister Hwang Kyo-an hosted a National Security Council meeting and the government also issued a statement condemning the North.

China also acted unusually quickly to condemn the North, as Pyongyang’s series of provocations this week was a blatant slap in the face to its long-time ally and main economic patron. Pyongyang fired three ballistic missiles on Monday as Xi was hosting the Group of 20 Summit in Hangzhou, and the fifth nuclear test on Friday came despite Beijing’s warning that the North must refrain from any action that will further escalate tension.

“Today, the DPRK again conducted a nuclear test despite widespread international opposition,” the Chinese Foreign Ministry said in a statement, referring the North by the acronym for its formal name, the Democratic People’s Republic of Korea. “The Chinese government firmly opposes this. We strongly urge the DPRK to honor its commitment to denuclearize, comply with the relevant security council resolutions and stop taking any actions that will worsen the situation.”

He also said China will firmly push for the denuclearization of the Korean Peninsula in cooperation with the international community, adding, “We will resolve relevant issues through the six-party talks.”

China is the chair and host of the long-stalled negotiations that also bring together the two Koreas, Japan, Russia and the United States.

China’s statement, though brief, was stronger than its previous one, issued after the North’s fourth nuclear test in January.

It urged the North to respect UN Security Council resolutions, while omitting the routine position that maintaining peace and stability on the peninsula and in Northeast Asia serves the mutual interests of all parties involved.

It also stressed that China will work with the international community and hinted that other issues can be discussed at the six-party talks. In the past, China said the nuclear crisis on the peninsula should be addressed through the six-party talks.

Although China did not specify what the other relevant issues are, the aftermath that Pyongyang’s provocations will bring, such as the U.S. deployment of a powerful antimissile system in the South, could be included. As Beijing and Moscow protest the deployment, Seoul and Washington said it is necessary to deter Pyongyang’s threats.

Japan’s Chief Cabinet Secretary Yoshihide Suga said the Japanese government will review plans to impose more and stronger bilateral sanctions against the North. After the North’s nuclear test in January, Japan barred North Korean nationals’ entry into the country and banned money transfers to the North.

The 15 member countries discussed the meeting schedule shortly after the North’s nuclear test, after Seoul, Washington and Tokyo called for a meeting.

Until now, the Security Council has mainly issued warnings to the North, but diplomatic observers said it may now carry out more meaningful punishment.