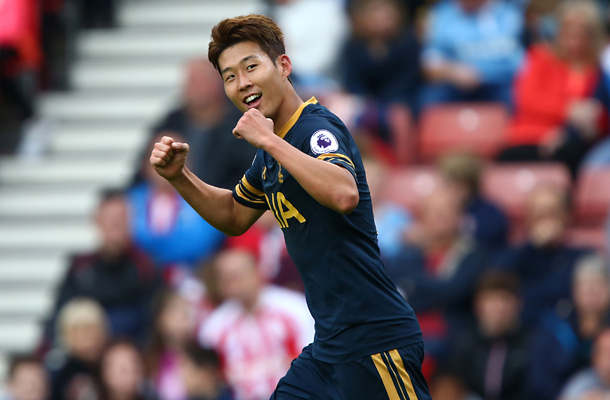 Son Heung-min of Tottenham Hotspur celebrates after scoring against Stoke City on Saturday. During his first game back in the English Premier League, Son netted two goals and tallied an assist to lift the Spurs 4-0 over Stoke City. [AP/NEWSIS]

Son Heung-min was the star of the show during Tottenham Hotspur’s 4-0 victory over Stoke City on Saturday.

During his first game back at the English Premier League, Son relished two goals and one assist, giving him a promising start to the new season after transfer rumors in the past few weeks put him in a precarious position.

Starting on the left flank in the Premier League match against Stoke City on Saturday at The bet365 Stadium in Stoke-on-Trent, England, Son scored in the opening frame to open up the scoreboard for the Spurs. Behind target man Harry Kane, Son played the second-in-line offensive midfielder and spent a solid amount of time opening up spaces on the pitch.

Son’s first goal came at the 41st minute, breaking off the impasse. Danish midfielder Christian Eriksen stabbed the ball from the right side of the field, and Son touched the cross with his left foot to change its direction toward the goal, sinking the ball inside the net to give Tottenham the lead.

The Danish-Korean duo collaborated once more shortly after the half-time mark. Taking the possession near the half line, Eriksen penetrated Stoke City’s pitch and found Son on the left corner of the penalty box. Eriksen laid the ball right in front of Son’s foot, who bent it over Stoke City goalie Shay Given to double the lead.

This was Son’s first multi-goal season game since he came aboard to play for the Premier League team last August.

After the third goal by Dele Alli, Son helped the Spurs complete the rout by assisting the fourth and final goal of the match, finding Kane in the 70th minute who faked the defender with a cut and calmly netted the ball in the center of the box after receiving Son’s cross.

After the game, ESPN rated Son’s performance nine out of 10, the most among Spurs players, saying “[Son] showed ambition and aggression as he repeatedly attacked down the left flank, and had a penalty appeal before he broke the deadlock. The South Korean then doubled his tally with a fine curling finish in the second half before setting up Kane’s close-range strike.”

Beyond the high rating, Saturday’s game turned out to be significant for Son in a number of ways.

Just before the season, the Hotspurs considered transferring Son to Bungesliga’s Wolfsburg but eventually struck a hard bargain and jacked up Son’s price out of concern that they might not be able to replace him.

Son’s spot on the Spurs has been precarious. Last season, he only scored a meager four goals. The Sun, a U.K. tabloid, reported last Tuesday that Tottenham could let go of Son during the coming winter transfer window if he fails to cement his position in the starting lineup of the Spurs.

Saturday’s match was an attempt to change his reputation among fans and silence his critics. The 24-year-old Korean is off to a good start in his quest to seal his post with the Spurs. Skipping the Korean national team’s World Cup qualifying match against Syria last week seems to have paid off for Son, and his boss, Mauricio Pochettino, also seems happy.

“It was an important result for us. I’m very pleased for our players and for our supporters. It was almost perfect today,” Hotspur manager Pochettino said. “We started the game a little bit sloppy. They were better from the beginning, [but] it helped a lot when Son scored and second half we were much better.

We are really pleased for him [Son], really happy. It was so tough at the end of last season. The first season is difficult for every player, but today he had an opportunity to show his quality, which is important for us and important for him.”

Son and the Spurs will next play AS Monaco FC on Thursday at Wembley in a European Champions League Group stage match.