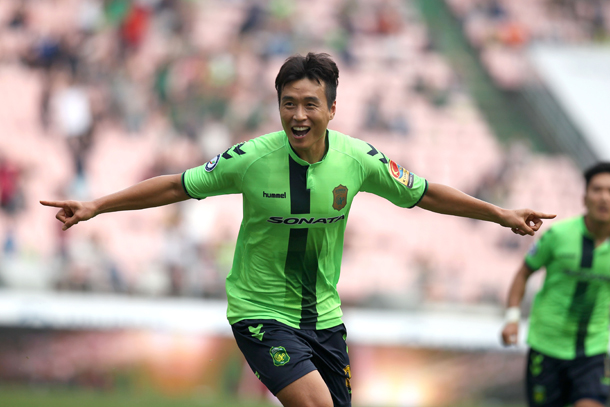 Lee Dong-gook of the Jeonbuk Hyundai Motors celebrates after scoring against the Dragons on Saturday. [K-LEAGUE]

The Jeonbuk Hyundai Motors remain undefeated in the K-League this season, a record that has now extended to 29 games in an unprecedented feat matched by no professional sports team in the nation’s history, whether it be in baseball, basketball or football.

Still, team manager Choi Kang-hee seems less than satisfied. Saturday’s game against the Jeonnam Dragons ended in a 2-2 draw, and it became evident to Choi that his club still has some work to do if it wants to take the K-League Classic and Asian Champions League trophies.

With time ticking toward the end of the K-League match on Saturday against Jeonnam, Choi’s face grew stern and hardened.

Jeonbuk took the lead at the 36th minute when Rodrigues Pereira Leonard scored off a penalty kick on a hand ball foul. Jeonbuk then doubled the gap when Lee Dong-gook drilled in a volley in the 74th minute. Just three minutes later, Vedran Jugovic netted one for Jeonnam.

At this point, no one would have questioned that a win was still in Jeonbuk’s favor, given the team’s strong performance this season. But then Jeonnam’s 19-year-old rookie, Han Chan-hee, scored the equalizer at the 81st minute, his first career goal, leaving Jeonbuk to eventually settle for a draw.

Granted, Jeonbuk did face some issues even before the teams took to the pitch. Midfielder Lee Jae-sung was left out of the game to recover from the Korean national team’s match against Syria. Another key midfielder, Kim Bo-kyung, was also excluded from the starting roster to maintain his condition for the upcoming Asian Champions League quarterfinals match against Shanghai SIPG on Tuesday.

In their stead were Shin Hyung-min and Jeong Hyuk, both recently discharged from the military on Sept. 3. The two had just one week with the team before Saturday’s game, and it was almost inevitable that they would struggle on the pitch.

The silver lining was that Jeonbuk still managed to extend its undefeated record to 29 games, but for Coach Choi, this was less than welcome news. The pressure to extend the team’s undefeated record has taken a toll on players’ focus. Instead of gunning for a win, they are often satisfied with a draw as long as it can continue Jeonbuk’s undefeated streak.

“I have not seen as many tied games as this season,” Choi said. “One win and two losses are better than three draws frankly.”

Early in the season, Jeonbuk fell into a similar pattern, winning several matches to take the lead in league standings but then falling into a limbo of draws.

“It is disappointing that we came out with a draw at home even though we were leading by two goals,” Choi said.

“We cannot play such games. Players are losing their focus on winning because they are concentrating too much on extending the record. We need to fix this.”

Jeonbuk nonetheless remains at the top of the league standing at the moment. Its main rival FC Seoul suffered a devastating loss to bottom-ranked Incheon United FC over the weekend.

Fans of FC Seoul are growing skeptical of Hwang Sun-hong’s leadership after he took over the managerial post in June.