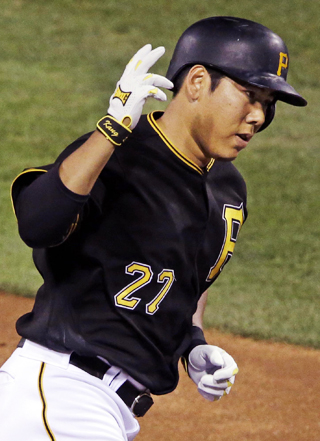 The Korean power hitter belted another long ball, his 18th home run this season and fourth in six days, during the Pittsburgh Pirates’ match at home against the Cincinnati Reds on Saturday in PNC Park.

His effort, though, was for naught. The Bucs suffered an 8-7 loss, putting a dent on the team’s shot at the postseason with the end of regular season fast approaching.

During the Major League game against the Reds, Kang went 3-for-4 while lacing three runs batted in (RBI) and a run.

The Korean batter started his hot-hitting game at the bottom of the first inning, when he hit a single during his first at-bat to bring home Josh Bell and tallying a single RBI. Kang’s RBI lifted the Pirates to lead 2-0 by the end of the first inning.

During his second at-bat in the third inning, Kang launched a two-run dinger to the left field. At the 0-2 count, Kang swung and made full contact off an 81-mile-per-hour curveball tossed by Reds starter Robert Stephenson.

Along with his run, Kang drove home Bell once more to add two more RBIs to his belt. Up until the third inning, three out of four runs that the Pirates scored came off Kang’s effort.

But the Pirates soon started to slide, giving out four runs in the fourth inning alone while tallying none for themselves. The Reds stole the lead during the next inning by driving home three more runs. Although the Pirates added two late runs in the sixth, it was less than sufficient to take back the momentum that already had gone to the Reds.

Kang, going to the plate at the bottom of the seventh, walked but was unable to drive home. He ended the day with another hit, singling off a 94-mile-per-hour fastball by the Reds’ flame-throwing Tony Cingrani during his last at-bat of the day. Kang was replaced by pinch-runner Alen Hanson.

Kang suffered a shoulder injury in August and had been opted to the Pirates’ 15-day disabled list. After a brief rehab stint in the minors, Kang returned to the Bucs on Sept. 5 and has been batting 10-for-20, an impressive .500 batting average with four homers and 10 RBIs in just six games.

“He’s working hard on both sides of the ball,” Pirates manager Clint Hurdle told MLB.com. “He’s playing fresh, playing aggressive, swinging aggressive. If he takes a swing that maybe he’s fooled a little bit he doesn’t care, it doesn’t matter. He gets back in the box and tries to size up and square up the next one.”

“I’m trying to push myself harder because we’re going toward the stretch,” Kang said. “My legs, my knees will always get better as time goes on. I feel good right now - I’m just trying to keep it consistent right now.”

Even as Kang continues to deliver, the Pirates are trailing. Their loss on Saturday puts the team five and half games back in the National League Wild Card standings.