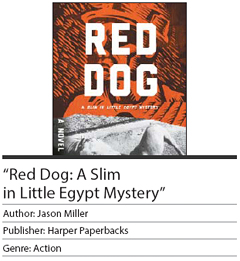 The “Little Egypt” region of southern Illinois is among the state’s most diverse - with rich farmland near fallow soil, abandoned coal mines and beautiful parks, economically depressed rural areas near at least two well-respected universities. And in the hands of Jason Miller, Little Egypt also makes an intriguing backdrop for a gritty, hardboiled novel that is unsparing in its view of its characters or location.

While Miller’s second novel certainly has the country environment nailed down with vivid scenery and realistic dialogue, the plot sometimes is bogged down by a lead character that isn’t completely fleshed out. Attempts sometimes fall short to make Slim a quirky wiseacre.

Slim runs Redneck Investigations from his home on “the dark throat of Shake-a-Rag Road” in Indian Vale, not far from the real LaRue-Pine Hills, which is in the breathtaking Shawnee National Forest. The real manager of Slim’s P.I. business is Anci, his 13-year-old mystery-fiction loving daughter. The single father has learned to trust Anci’s common sense and business acumen, though lately work has been pretty slow. Slim’s last job was retrieving some stolen chickens, a case that turned out to be more involved than it should have been. But he’s suspicious from the start about his new clients, the odd-looking Sheldon Cleaves and his son, A. Evans. They offer him $65 to bring back their “little one,” Shelby Ann Cleaves, who is a pit bull. But bringing the dog home turns out to be a complicated descent into the worst denizens in Little Egypt, including racists, meth dealers, dogfighting ringleaders, each more ruthless than the past.

Miller’s brutal plot is definitely not for the faint of heart, and he handles the story’s violence well, even when it is a bit over the top. A fine use of humor helps to balance “Red Dog,” but don’t mistake those bits of wit for a comic crime fiction in the vein of Tim Dorsey. “Red Dog” is more hard-boiled than humorous, and the story is at times uncomfortable.

Slim is easy to root for, but we want to know more about what makes him tick. But Slim’s perpetual wisecracks grow weary and slow down the story.

Using a mixture of real town and fictional spots, Miller’s view of Little Egypt, in the southern third of Illinois, evocatively shows how a regional mystery can incisively explore an area.