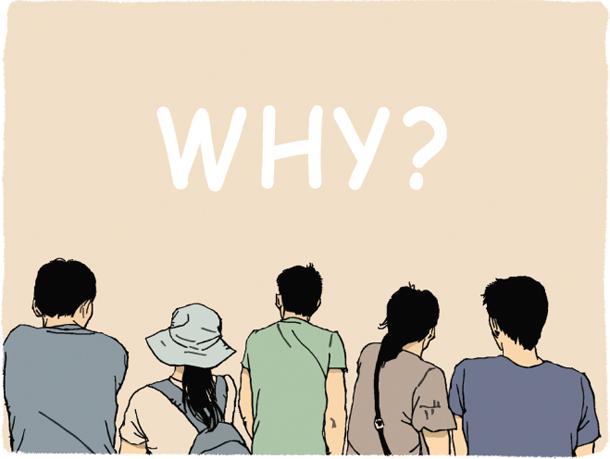 There I was standing in the stationary store the other day, lined up to purchase pens, pencils and some printer paper before the start of classes. When I reached the counter, I was struck by a gaudy stack of candy bars and other sweet treats. But this is a stationary store, I thought, why am I seeing all these unhealthy snacks?

You would never have found candy bars piled up in a stationary store in Korea 15 years ago. Back then stationary stores had a clear purpose of supplying people with the paper and pens that they needed to conduct their business, or to pursue their studies.

All that has changed forever. Stationary stores are about tempting people to buy things that they do not need, and that impulsive behavior is considered essential to successful business.

The same principle holds true in bookstores. Once places where students burrowed away to read books about politics, literature and philosophy, now the books are being replaced by stuffed animals, backpacks and trivial accessories.

And every restaurant hangs a sign in front featuring glowing photographs of tasty foods designed to appeal to casual pedestrian’s cravings.

We have adopted a new normal, the assumption that the economy should be focused not on what people need, nor on what is good for our society, but rather on making money persuading people to buy impulsively through an appeal to their most base desires, without a concern for whether the purchase is necessary.

The dangers that result from making impulse and short-term satisfaction the driving force for the economy are tremendous. Human activity has no greater meaning than satisfying base cravings and imagined needs. The citizen becomes a consumer who has no higher ethical purpose for his actions; there is no longer a greater national plan than to consume without thinking about the future, and thereby to generate profits.

Such an approach to economics is alien to Korean culture. The central values of Korea are restraint, humility and an understated self-control in dress and in daily life. Such a culture of restraint extended even to the well-off families who lived in relatively modest homes in traditional Korea (certainly compared with the chateaus and town houses of their peers in Europe).

Thrifty Koreans valued every single grain of rice and threw nothing away. It was the simple and unadorned worth of simple objects that was central to Korean aesthetics.

The tragedy of an economy of impulse is not just the needless waste, but rather the loss of any sense of “why” in the lives of people. They just do things because others do so, they are consumers, but not citizens or family members. For that matter, the understanding of causality will ultimately break down, with people feeling that events simply happen without any relationship to their own actions.

Many young people are pushed to consume, but they do not know why they do so. They feel compelled to engage in such behavior because of social pressure, or because of marketing, but they derive no satisfaction for it. The individual feels increasingly alone, without meaningful friends or meaningful possessions.

There is a darker implication of an economy based on impulse. It encourages cultural decadence, a decadence that creeps into all aspects of society, conservative and liberal, and eats away at the ability of individuals to determine right and wrong, to conceive of a better society or make moral judgment.

As we lose the ability to think for ourselves, to control our own actions and to articulate a response to serious social problems, we cease to be members of a society.

A generation of Koreans raised to think that impulsive actions are a positive will not have the patience or the self-control to wrestle with contradictory facts or separate complex truths from convenient fictions. We risk losing the ability to imagine a future for our society and to work actively for that goal. Indulgence will lead us into fatal passivity, and we will find ourselves dragged along by developments that are beyond our capacity to understand.