Korea is a cool but tricky place to start a business

Korea is a cool but tricky place to start a business 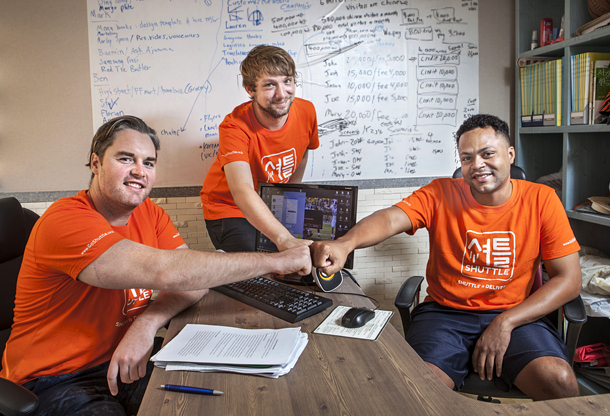 On a Friday morning in February 2013, Zach Marble, a young American working as a senior consultant for Capstone Financial, and his British friend Ben Hough, a private English tutor, were having a meal at Mr. Pancake House in Shanghai.

The two had been friends since they met in Seoul in 2008, where both taught English.

That morning, Marble came up with the idea of starting a food delivery service in Seoul. They were inspired by delivery operator Sherpa’s, which was thriving not only in Shanghai but also in Beijing and Suzhou.

The two men knew Seoul’s expat community had nothing like it.

“We always used Sherpa’s,” Marble said. “When I was in Korea from 2008 to 2010, I would have to call my Korean friends to order Dominos or Pizza Hut. So I knew it was a needed service in Seoul.”

He realized that morning he didn’t really like his job in consulting.

A couple of days later they were back at Mr. Pancake House working on their new venture.

It wasn’t long after that the business partners discovered a rival. American Jason Boutte, who lived only 700 meters away from Bird Rider’s office, launched his own food delivery service, Ynot-Takeout.

After two years of competition, Marble, Hough and Boutte met and merged their companies, renaming the new company Shuttle Delivery, which launched earlier this year.

Today Shuttle Delivery drivers can be spotted steering their motorcycles on the streets of Itaewon and Haebangchon in central Seoul.

Hannah Waitt was an Austin, Texas, native who came across a K-pop music video on YouTube in 2011 while attending the University of Texas. Waitt said she was instantly fascinated by the cultural difference between the Korean pop scene and that of America, which she grew up on.

Despite having no knowledge of K-pop or Asian culture, she proposed K-pop as the topic for her senior thesis - which was shot down by her advisor immediately. She decided to take Korean classes and took off for Seoul in 2013. Her first job was as an intern for Billboard Korea.

In 2014 Waitt moved to New York. There she came up with the idea of starting an online service dedicated to K-pop for English speakers. She thought there was a serious lack of such information resources despite the industry’s growing appeal around the world.

Waitt co-founded MoonROK, which became one of the 40 finalists in the Korean government’s foreign start-up competition this year.

Jason Lee is a Korean-American who has started a wedding information social networking service called JJ Company. It’s a social networking app that allows couples to search for wedding services - including photo shoots and wedding dress companies ? and get feedback from friends.

Lee became the first Korean-American to win a D-8-4 start-up visa in January 2014. The visa program was introduced by the government in 2013 to encourage talented young foreigners to launch start-ups in Korea.

As these three cases illustrate, foreigners including the gyopo ethnic Koreans who were born and raised in other countries - are opening businesses in Korea. Seoul is becoming a hot destination for young people with ideas thanks to its advanced technologies, high-speed internet, leading fashion and flamboyant entertainment industries.

The global success of high-end consumer goods including smartphones and premium TVs and IT development by Korean start-ups has also put Korea on the map for ambitious young entrepreneurs.

According to the Korean immigration office, which is under the Justice Ministry, half of the 2.03 million foreigners living in Seoul are in their 20s and 30s. Those in their 40s trailed behind at 17 percent.

Although the majority of foreigners living in Korea (including those on stays of less than 90 days) are Chinese, which account for 51.4 percent, Americans comprise 7.4 percent and Vietnamese 7.1 percent.

The immigration office says that as of July, nearly half of the foreigners who have applied for job visas aren’t manual laborers destined for factories.

Since President Park Geun-hye was sworn into office in 2013, the Korean government has pushed a creative economy initiative with the goal of finding future growth engines for the country beyond the country’s manufacturing base. High-tech industries are particularly desired.

Korea is believed to have reached its limits doing business the conventional way and the world faces a major paradigm shift with the fourth industrial revolution, as high-tech replaces existing industries and production practices.

According to Hyundai Research Institute, the number of start-ups in Korea has more than tripled from 8,798 companies in 2010 to 31,260 last year.

Zikto, an IT company specializing in wearables, was a foreign start-up that benefited from the creative economy initiative.

“Initially we received 55 million won from the Korea Institute of Startup and Entrepreneurship Development,” said David Han Suk Suh, the Korean-American CEO and co-founder of Zikto. “We were able to raise 180 million won in just 40 days through the crowdfunding platform Kickstarter.”

Suh said thanks to the “creative economy” framework, the atmosphere for starting a business in Korea is favorable, including more cooperation from big Korean companies.

Some have urged the Korean government to take more aggressive steps to attract talented foreigners to help create a unique ecosystem, especially since many major economies are stepping up policies to attract smart young minds including the U.S. and China.

Last month, the Barack Obama administration introduced an entrepreneur visa that would lower the barriers for foreigners launching start-ups. The Department of Homeland Security introduced an International Entrepreneur Rule (IER) that doesn’t need the approval of lawmakers. This program grants a temporary visa for foreigners who meets certain requirements, including owning a 15 percent stake in a U.S. start-up. The foreigner will be allowed to stay in the U.S. for a maximum of five years if the start-up shows continuous growth and contributes to the American public. The program is expected to benefit some 3,000 foreigners a year.

The Korean government has been working on improving regulations that have prevented talented foreigners from building businesses in Korea.

“I don’t think the Korean government’s effort to attract talented foreigners falls behind that of other countries and they have been stepping up efforts such as providing consulting to foreigners who are interested in setting up a business,” said Son Ka-nyeong, a researcher at the Korea Information Society Development Institute. “Different government departments are trying to improve inconveniences that foreigners may face.

“The Korean government used to focus mostly on the manufacturing industries [when it came to helping foreigners] but today it has definitely shifted to high-tech industries and skills,” he continued, “which is also a global trend.”

But foreigners trying to start a business in Korea say that there are still hurdles that discourage such efforts.

“For a start-up to settle in a foreign country there’s a lot of things it must go through such as finding a specialized accountant or a law firm. In the case of Korea, there aren’t English services or a unified organization that provides such services.”

Lee believes many foreign start-ups could give up on a business in Korea due to a lack of support.

But Lee said that the Korean government has made efforts that can’t be found in other countries, even Japan, such as providing consulting and one-on-one meetings with incubators.

A serious issue is the complicated visa system.

Unless a foreigner is in Korea on a D-7 visa, which is given to someone who works in a foreign institution like an embassy, is transferred by an overseas-based company, or is on a student visa, most must try for a D-10 visa, which allows them to be in Seoul for up to six months.

It’s actually a visa that allows foreigners to look for a job. Many have used it to launch businesses. However, there are several requirements to get the visa. One is to have $100,000 in your personal bank account.

Not many young talents who want to start a business here have that much money. Even if they could persuade an investor to cough it up, that investor would have to deposit that $100,000 in the young person’s personal bank account.

“Let’s say I convince someone else in my business plan to invest $100,000. Unless it’s in my bank account back home, I can’t get a D-10 because it’s technically not my money,” Hough, co-founder of Shuttle Delivery said. “But for Korea, the business will end up the same [whether it’s my money or an investment]. The jobs created [by the investment] will be the same.

“As long as the money comes in and not in any illegal way, then there should be no real difference, right?”

Boutte, another co-founder of Shuttle Delivery, said he has actually seen a foreign friend in the restaurant business being forced to close shop because of the $100,000 regulation.

The D-8-4 start-up visa introduced in 2013 only requires a bachelor’s degree or an intellectual property patent to apply for the visa. People who get the D-8-4 can stay in the country for two years.

However, since it was first introduced in October 2013, only 11 applicants have landed the D-8-4 visa, seven in 2014 and four last year. There have been a combined 50 teams that have applied but the requirements and evaluation have been tough.

Another major hurdle that foreign start-ups cite is the ActiveX security system that prevents foreigners from making purchases on Korean websites.

“ActiveX is a huge problem,” Lee of Pulzze System said. “The system can’t be found anywhere else and only limits access to Korean services or doing business from Korea, which is a major issue that needs to be resolved.”

ActiveX is a software framework developed by Microsoft. Because of security laws adopted 17 years ago, ActiveX has been used as a mandatory security system for all online and electronic financial exchanges. Since ActiveX only operates on Microsoft’s Explorer, other browsers such as Google’s Chrome or Apple’s Safari are denied access.

The Park Geun-hye administration in early 2014 decided to lift the mandatory installment of ActiveX.

However, a study still shows that a majority of Korean financial institutions including banks still use ActiveX.

“I advise any foreign start-up considering a business in Korea to have a Korean on your business license,” Marble of Shuttle Delivery said.